Ideal if you're coming for the first time, this Barcelona combo deal combines two popular excursions that provide the perfect introduction to Barcelona's famous landmarks, including the Cathedral, Gothic Quarter, Olympic Village (Vila Olimpica) and stunning Montjuïc Castle. Take in aerial views of the Barcelona skyline, complete with Sagrada Familia and the port, during a ride on the Montjuïc cable car. Then, ride up to the Royal Basilica of Montserrat by cogwheel train to explore and see the 10th-century statue of the Black Madonna and taste the local liquor. By booking these excursions at the same time, you will save XNUMX%! 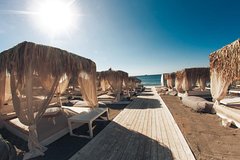 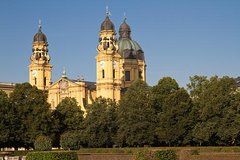 Tour of Barcelona including a cable car ride to Montjuïc (4,5 hours)
Meet your local guide in central Barcelona and begin your morning tour with a stroll through Plaza de Catalunya; admire its many fountains and statues, then stroll through the medieval streets of the Gothic quarter. As you walk, your guide will give you interesting information about Barcelona's historical sites. You will discover many buildings dating back to the XNUMXth century, including Barcelona Cathedral. Then continue to Plaza Sant Jaume, where there are important government buildings, including the Palace of the Generality and the Town Hall.
Then, you'll board a coach and enjoy views of the Mediterranean and the Barcelona coast on the journey to Montjuïc, a hill close to the coast, which offers many attractions. Pass the Olympic Village (Vila Olimpica), which hosted athletes during the 1992 Olympics, as well as the Olympic Port. Continue to Montjuïc for panoramic views of the city and port, then visit the Lluís Companys Olympic Stadium, Palau Sant Jordi, and Calatrava Tower. Then, visit the Spanish village (Poble Espanyol) where you will discover the architecture as well as the traditional crafts of the different regions of Spain.
Finally, ride the Montjuïc cable car and during the descent to Montjuïc Castle, take in aerial views of Barcelona landmarks, such as the Sagrada Familia. You'll admire the castle from the outside, then return to central Barcelona for a short lunch break (own expense).
Visit to the Royal Basilica of Montserrat and route by cogwheel train: (4,5 hours)
After passing through small picturesque villages, you will arrive in the small town of Monistrol where you will board a cogwheel train for a 20-minute ascent into the mountains. Contemplate the splendid landscape, and descend on the steep mountain of Montserrat, a peak which rises to approximately 1 m.
The Royal Basilica of Montserrat has been one of the highest places of pilgrimage in Spain for centuries, thanks in particular to its famous XNUMXth-century Romanesque statue of the Black Madonna Moroneta. On weekday afternoons, you can listen to one of the oldest children's choirs in Europe: La Escolania de Montserrat.
After your guide gives you an introduction to Montserrat, teaching you about its importance in the past and today, enjoy your free time (approximately 2 hours) to visit and experience the magic of the site at your leisure. Afterward, meet your guide to enjoy a tasting of four typical Montserrat liqueurs and learn more about the site by watching the 'Montserrat Between the Gates' video at the visitor center. Then, return to Barcelona by coach.

add a comment of Barcelona Super Saver: Sightseeing Tour with Cable Car to Montjuic and Excursion to Montserrat