Aruba is defined by clear, deep blue skies and the inherent warmth of the trade winds. It's an island that attracts sports enthusiasts as well as the most enthusiastic sun worshippers. On this tour, get a unique view of the islands, and most of the attractions – the Natural Bridge, see the second largest city in Aruba, and learn how Baby Beach got its name. 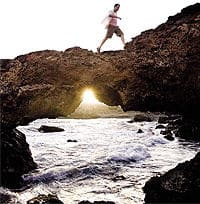 Enjoy several stops along the way, including:

On the return trip, you will drive to downtown Oranjestad. You have the choice of being dropped off downtown to stroll between the shops and admire the Dutch architecture, or be dropped off at your hotel.

Please note : If you are arriving by cruise ship, please provide your cruise ship details in the 'Hotel Information' field.


Please note : Beginning November 1, 2009, the afternoon tour will travel to Alto Vista Chapel and California's Lighthouse instead of Baby Beach.

Return details:
Return to the starting point around 4 hours after departure

Introduction to Diving in Aruba