Discover York at your own pace on a hop-on hop-off sightseeing tour of the city. Discover the Roman capital of Northern England with a 24-hour ticket, aboard a double-decker open-top bus. See all of the major sights as you hop on and hop off at 20 stops located around the city. 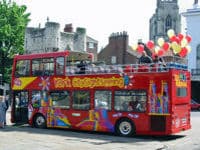 Once the Roman capital of northern England, York has seen wars, peace accords and prosperity throughout its checkered history. Marvel at the colossal 13th century Minster York, where all the medieval windows are located in stained glass windows from Europe and to soak up the city described by King George VI as being "the history of England".

You can hop on and off as many times as you want on this double-decker bus. There are 2 routes and 20 stops with each route taking approximately 45-55 minutes. The bus departs every 10 – 30 minutes from each stop. Tickets are valid for 24 hours after first use.

Barcelona Walking Tour in Photos: A Walk Through the Ages ❯