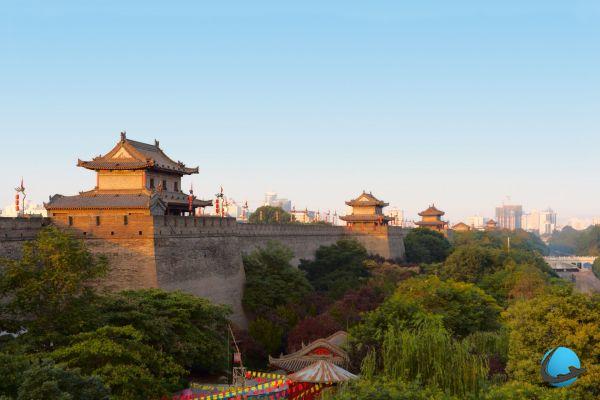 Located in the basin of the yellow river, Xi'an city offers unparalleled treasures like the terracotta army, the great wild goose pagoda or its surrounding wall, a vestige of its importance during the last centuries. Discover 8 must-see places to see in Xi'an during your stay!

The army of terracotta soldiers is a real army on a human scale. These terracotta subjects are placed in combat formation. Everyone can admire the costumes of the Imperial Guards and the thoroughness with which these units were prepared. Preserved in a museum, you will also have the opportunity to contemplate war tanks made of wood. They represent an impressive testament to creativity under Emperor Qin and are one of the major attractions to see in Xi'an. Allow a good half-day visit! 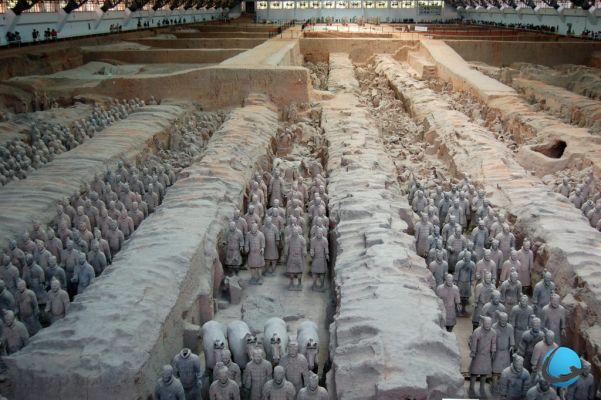 The Great Wild Goose Pagoda is a holy place for many Buddhists. Located south of Xi'an, it made it possible to preserve representations of Buddha. One of them notably has a third eye, which symbolizes the Buddha's ability to see what ordinary people cannot see. 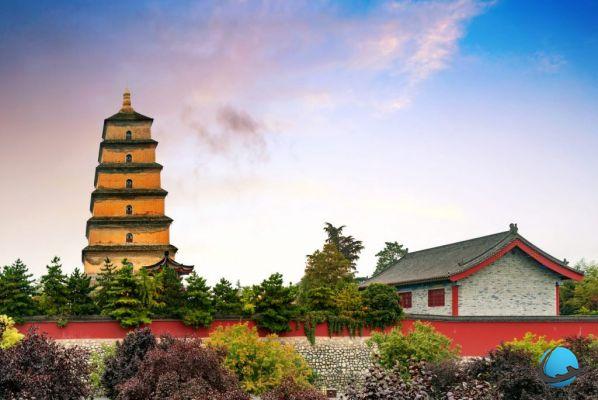 Marvel at the spectacle of musical fountains

Xi'an fountain show is famous across Asia for its size and the quality of its sound and light fittings. Multiple performances take place during the day but we recommend going to admire the show after dark. This free activity only lasts about twenty minutes. So optimize your pleasure by starting by observing the festivities from the platform, before launching yourself in the middle of the fountains. You will treat yourself to a lively and refreshing walkabout. A show to see in Xi'an, in front of the big wild goose pagoda! 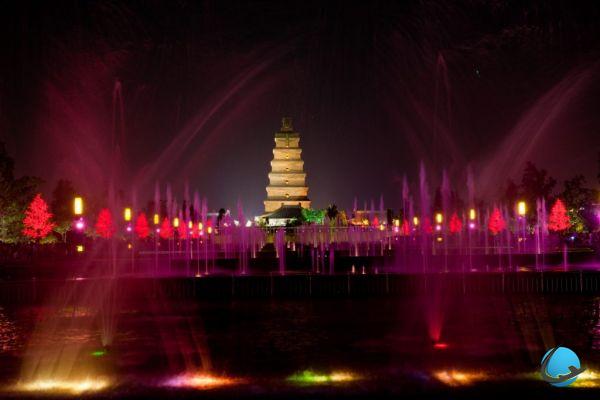 Admire the historic towers of Xi'an

The city of Xi'an is the symbol of the very Chinese success between an omnipresent tradition and a certain taste for modernity. As evidenced by the two most beautiful towers to see in Xi'an, which recall the glorious past of the city. Start with the Bell Tower, or Bell Tower. It marked the center of the city under the Ming dynasty and offers an exceptional view of the surroundings. A few streets away from his cousin, the Drum Tower, is the largest in China. From the top of its 34 meters, you will contemplate centuries of history with its ancestral drums suspended from the facades and its multiple architectural influences. 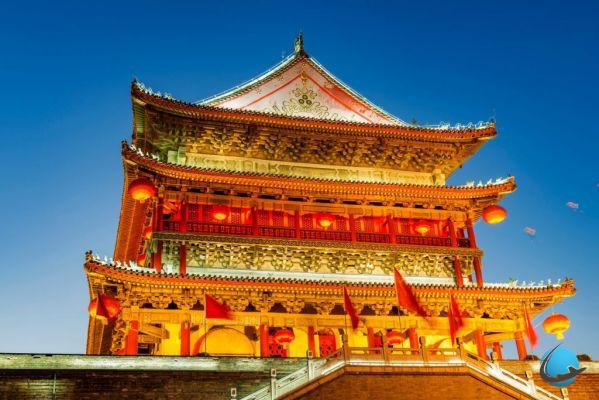 Explore the Forest of Stelae Museum

Le Museum of the Forest of Stelae is a lapidary museum whose visit is essentially turned towards the collection of 2 stelae between the 300th and the 10th century. This set was basically incorporated under the Tang Dynasty. An unusual visit to see in Xi'an! 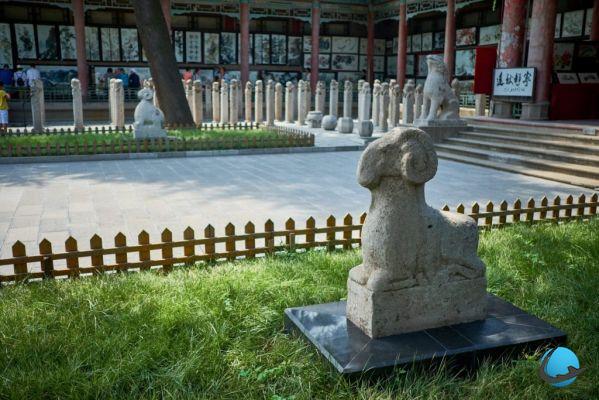 The forest of stelae

Built in 742, the Great Mosque of Xi'an impresses with its dimensions. It is also one of the four largest mosques in China.. It differs from the mosques that we know by its Asian style, very close to a Chinese temple. An original rendering that makes the visit a must! 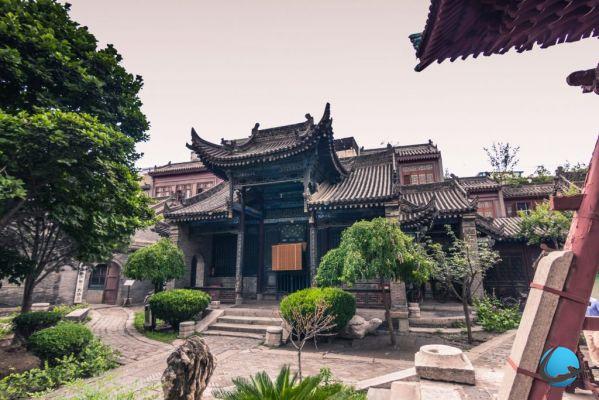 The great mosque of Xi'an

Stroll on the wooden ramparts

The city walls have been particularly well preserved in Xi'an. It is also one of the only cities in China to still retain an enclosure. You can walk a good part of Xi'an from the top of this wall. At night, observe it with the help of the night lights… you will be struck by a very Asian serenity! 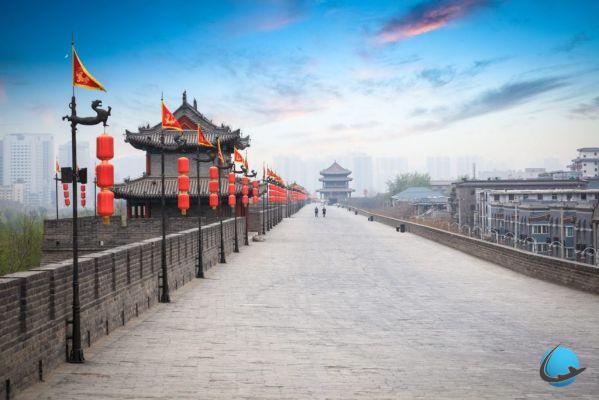 Part of the Xi'an city walls

If you have seen all there is to see in Xi'an, we recommend that you take the key to the fields and go to Mount Hua. About a hundred kilometers from the city, landscapes that are unique in the world await you, for which you will still have to provide some effort. The hike begins with the Pic Nord which you will have to reach by the gorges path, by the cable car. This is the most popular and easiest hike. But you can also take the soldiers' trail and its 4000 steps, some of which are almost vertical! Four other peaks remain to be explored… Sensitive bodies, refrain! 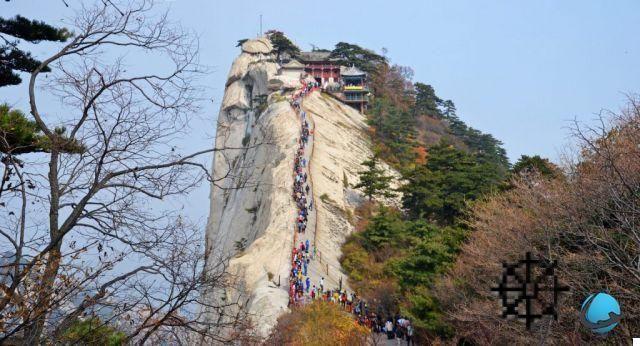 Here is some practical information that you will find useful during your stay in Xi'an: 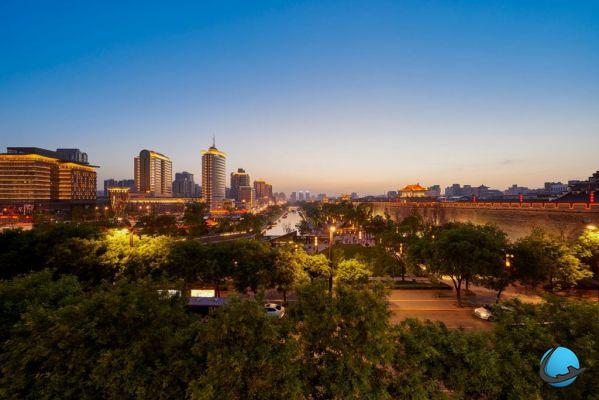 The essentials of Xi'an… and after?

If Xi'an is a true showcase of the past of imperial China, the immensity of the country makes it possible to delve into its complex history by multiple means. China likes to remind people that it is one of the most dynamic nations on the planet. In Hunnan, in the heart of the Shinuzhai geological park, you can, for example, cross the longest glass bridge in the world. 300 meters above a yawning chasm all the same! For less adventurous travelers, we recommend the opulent and ultra-technological tours of Shanghai and in particular the Pearl of the Orient which is one of the highest in the world. And why not opt ​​for a stay in one of the luxury hotels of the Wall of China? The most comfortable way to fully experience the multiple personalities of the Middle Empire!

What to see or do in Provence-Alpes-Côte d'Azur? Travelers' favorites ❯

The longest glass bridge in the world is in China

Hong Kong is even more beautiful from the sky

Add a comment from What to see in Xi'an? 8 must-see visits!