What are the most beautiful villages in Ardèche to visit? 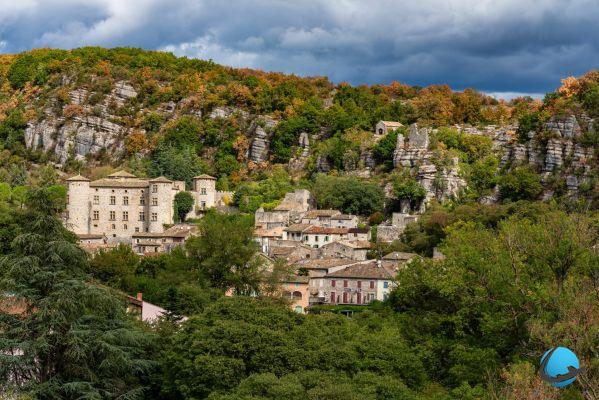 In the Auvergne-Rhône-Alpes region, there is a separate department, well known to lovers of natural areas and suitable for relaxing holidays. The Ardèche indeed enjoys a particular geographical location which has enabled it to limit the urban invasion and to thrive on ethical tourism. Both a nature reserve and a center of historical interest, the department attracts many visitors looking for a quiet corner to relax and reconnect with nature. Symbols of its discreet prestige, many beautiful villages display their unquestionable taste for tradition while blending in with a breathtaking landscape. Let's go and explore the most beautiful villages in the Ardèche!


Balazuc, the guardian of the Ardèche tradition

Like most of the region's villages which have developed along the Ardèche river, Balazuc has chosen an elevated escarpment as an establishment, in order to gain height in the face of the winter rising waters. It is rumored that the village has existed since prehistoric times and that through its winding alleys, we would follow in the footsteps of our distant ancestors.

Ce qui est certain, c'est que the typical architecture of southern Ardèche makes a strong impression on the visitor. The arrival in the village, by taking the bridge, is particularly striking and its Romanesque church, sober and solemn, never fails to arouse respect in the hearts of those who approach it. 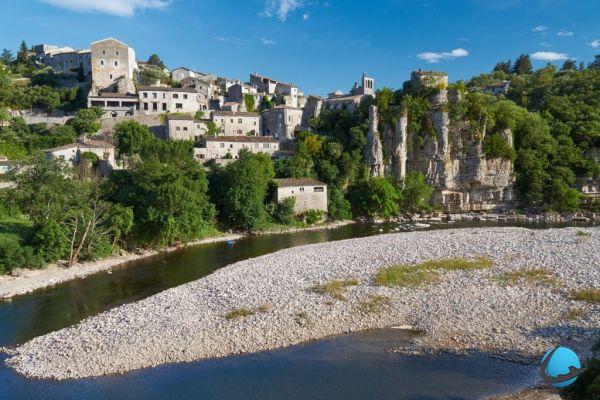 Vogüé, one of the most beautiful villages in France

With a strange name, the village of Vogüé is regularly cited among the most beautiful villages in France. We suspect its insertion in the extension of the surrounding mountain to have a lot to do with it, as it brings harmony to the whole.

Right here, nature and civilization seem to be one single entity. This natural arrangement is coupled with a strong historical interest because this village of rustic architecture is topped by a magnificent medieval castle from the 12th century. A real icing on the cake, this noble construction has welcomed all the local lords and now tells the story of the country by opening its doors to curious visitors. 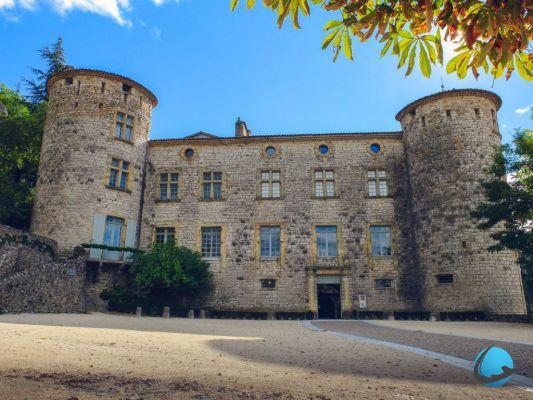 GOOD RELAXATION PLAN
What if you decided to take a little break during your stay? With your feet in the water, in the heart of a pine forest, choose to book a spa weekend near Vogüé and you will enjoy many activities to do you good and relax during your vacation. Balneotherapy, sauna, hammam, massages, nothing is too good to set off on the right foot towards the highest peaks and savor the magnificent landscapes of the Ardèche!

Among the villages in France associated with Prehistory, Vallon Pont d'Arc is surely one of the most famous. The explorations of historians have made it possible to uncover many primitive caves, making a real Mecca of Prehistory which attracts many curious people every year.

However, Vallon Pont d'Arc is even better known for its famous natural arch, which has earned it its name. Slowly dug by the continuous flow of the waters of the Ardèche river in the soft limestone, this natural canyon, dotted with shrubs clinging to its sides, offers a grandiose spectacle to swimmers looking for freshness in the heart of summer. 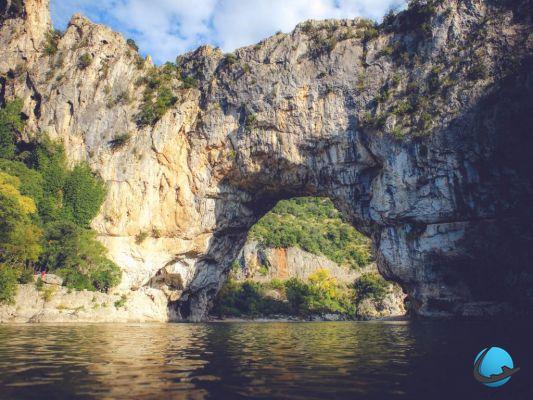 Perched on a cliff overlooking the waters of the Beaume, the picturesque village of Labeaume brings together many typical Ardèche houses with their arcades and the unmissable Virginia creeper that invades their walls. Around the church and the main square stretch small narrow streets where the café terraces seek shade to attract the weary traveler.

In addition to displaying its character, the village of Labeaume has taken advantage of the mass of tourists fascinated by its beauty from another time. There are thus many local craft stores but also ice cream parlors, restaurants and of course many visitors in summer, particularly during its classical music festival ! 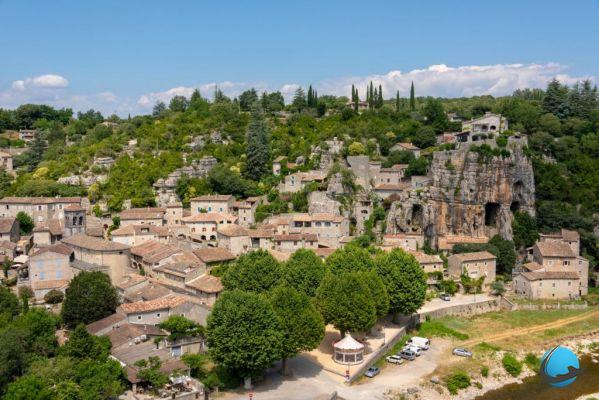 If most of the villages of Ardèche are recommended for their centuries-old alleys and the discreet charm of their houses, the commune of Ruoms is especially known for its dynamism and the many activities that take place there. Here you will find all possible accommodation amenities but also many bars and restaurants to meet people from the region and elsewhere.

We appreciate Ruoms for its lively local life but also for its parades which, carved into the rock, offer multiple means of communication to more isolated regions, promises of many discoveries in the Auvergne-Rhône-Alpes region. 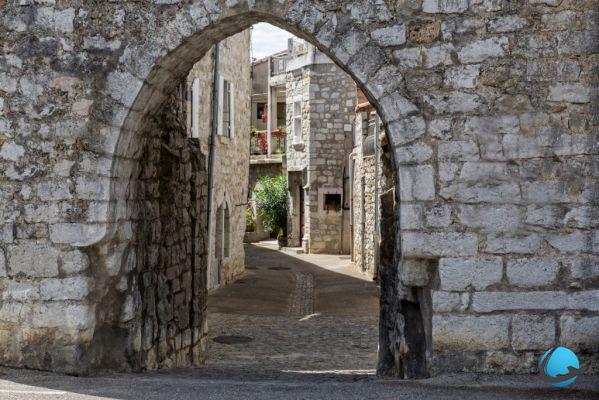 Visit the village of Ruoms

Saint-Montan, the story of a hermit victim of his own success

According to legend, the village of Saint-Montan was born following the installation of an old hermit in the region, fleeing his native region of Picardy where the precision of his visions would have earned him a celebrity he did not want. The ace ! History seems to repeat itself since the medieval village, its cobbled streets, its imposing castle and its stone houses, some of which date from the 12th century, have earned Saint-Montan the rank of “villages of character in the Ardèche”! As if fame will pursue the poor hermit indefinitely ... 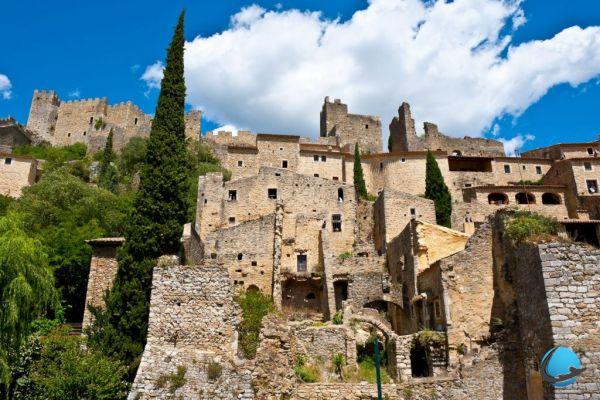 Saint-Montan and its old stones

At the junction between a limestone plain and the first foothills of the Cévennes, the village of Banne is built on a slope and divided into two distinct districts. The first developed around its parish church whose pointed bell tower acts as a beacon on walkers from the plain. In the Fort district, there is an imposing medieval castle, calmly watching over the inhabitants.

A link between these two worlds, the central square is endowed witha superb shaded fountain, ideal for finding rest after long hours of trudging in the surrounding hills. 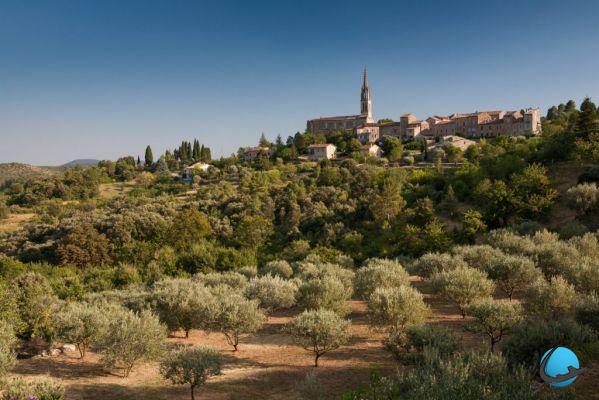 The pretty village of Banne

Beautiful villages in Ardèche… but not only!

Ardèche is a separate department in the hearts of the French. Guardian of unspoiled nature but also of the secular history of our country, the region attracts more and more visitors each year during their holidays. The ecological concerns of our time are helping to increase its reputation and now place it at the forefront of the tourism of tomorrow! Know how to travel ethically, take an interest in the history and traditions of the locals and above all always ask yourself how to travel responsibly. Adventure only knocks at the door of the curious!

What are the most beautiful villages in Auvergne? Here are our 11 favorites! ❯

Bordeaux or Toulouse: where to go for a wonderful holiday?

12 ideas for getting away from it all around Paris!

What to see and do in Marseille? 15 must-see visits!

Why go on a stay in a club?

Add a comment from What are the most beautiful villages in Ardèche to visit?