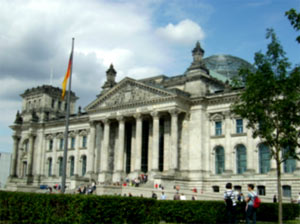 Before taking the mythical Berlin avenue, we begin this walk with the essential (and free!) visit of the German Parliament, the Reichstag.

Built at the end of the 19th century, the building has undergone the trials of history and consequently architectural upheavals (partially rebuilt after the fire of 1933, "wrapped" by Christo in 1995...), which have contributed to its aura to the German people.

The highlight of the visit is at the top of the glass dome, where a gallery allows you to admire the Tiergarten, the Brandenburg Gate and Unter den Linden.

Very close to the Reichstag, the Brandenburg Gate marks the end (or the beginning?) of Unter den Linden and the eastern entrance to the Tiergarten. 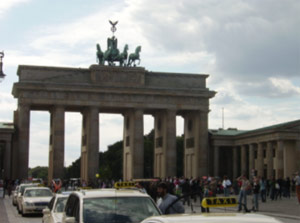 Built in the 18th century, this great arch symbolized the division of the city for a long time (the wall passed through it) but is today a flamboyant monument dedicated to the entire German Nation.

From Pariser Platz where the Brandenburg Gate is located, we take Unter den Linden Avenue (in French “Under the lime trees” for its row of lime trees planted in the central reservation).

These are truly the Champs-Elysées of Berlin.

All along the avenue, chic cafés, luxury boutiques, administrative buildings, luxury hotels (including the Adlon palace, which hosted stars such as Chaplin, Orson Welles, Greta Garbo…)…

Everything is there to give the place unparalleled prestige.

And on the prestige side, we will linger in front of the many embassies, that of France, that of the United States, and that of Russia in particular, with its “Communist era” statues. 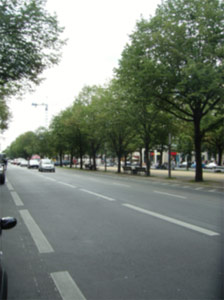 From Linden-Forum, the avenue is an immense chain of monuments and museums of all kinds.

First with the National Library, a large neo-baroque building, then the Humboldt University, the most prestigious in Berlin, where Marx, Hegel, Einstein studied…


In the middle of the avenue stands the equestrian statue of Frederick the Great (King of Prussia in the 18th century).


Continuing, we discover the Sainte-Edwige cathedral, a magnificent building reminiscent of Roman churches.

And that's when we arrive on Museum Island...

The “Unter den Linden” station is on lines S1 and S2 of the Berlin underground.

Short precise article on the Reichstag [in French]
Hotel Adlon website (in German or English) http://www.hotel-adlon.de/de/hotel/index.htm
Official website about the Brandenburg Gate and the events taking place there (in German)
http://www.brandenburgertor.de/