Beyond the grandiose beauty of the landscapes of Uluru and Katja Tjuta Park, these places tell us a long, very long story.

Our favorite activity: Helicopter flight over Uluru and Kata Tjuta

The origins of the rocks forming the Uluru monolith and the domes of Katja Tjuta date back to the Cambrian period, some 550 million years ago.

Formed in the shallow sea that covered central Australia, these sedimentary rocks were later upset by the formation of the mountains around present-day Alice Springs.

Today, they stand on the Australian plain and have been for 300 million years, subject to the erosion of the elements that have sculpted their strange shapes.

The Park was classified as a World Heritage Site by UNESCO in 1987 for two reasons: its biological and geological importance as well as its cultural importance.

Human occupation around these sites is said to date back 10 years, but for the Aborigines, these places and themselves have always been present, since the time of Creation.

Here, more than anywhere else, nature and culture intertwine, are permanently connected.

Because for the Aborigines, there is no difference between nature and culture, between past and present: everything comes from Dreamtime, the Time of Dreams and everything returns there.

Among the Anangu, Dreamtime is called Tjukurrpa. 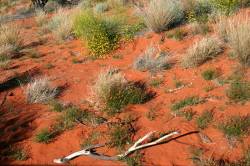 Uluru and Katja Tjuta were not places of life but of passage and ceremonies.

The Pitjantjatjara and Yankunytjatjara tribes, locally called Anangu, were nomads who traveled miles in search of water and food.

Their sacred law told them how to maintain the landscape and protect its resources.

Burning, for example, has been practiced by Aborigines for millennia and the Park continues to practice it in order to maintain the mosaic vegetation typical of the central desert.

All the vegetation is impregnated with the influence of the Aborigines. 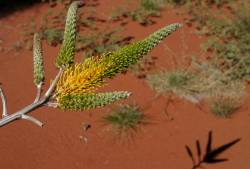 A story alone symbolizes the interconnection between Nature and Culture in these places.

A Dreamtime story in Uluru concerns the mala, a kind of small desert kangaroo.

The story tells how Mala ancestors were attacked by Kurpany, the monstrous dingo while preparing for a ceremony.

The real malas who lived around Uluru were exterminated by the arrival of Europeans, victims of the cats and foxes introduced by them.

However, a reintroduction program has been set up to repopulate the area, with the help of the Aborigines who are pleased to see the “totem” animal return.

A beautiful story of reconciliation between Aborigines and Western culture, between protection of nature and protection of Anangu culture.


Like the Malas, the Anangu had left the region with the arrival of Europeans, but the rise of tourism has brought them back to these lands, where they now work in cooperation with the Park to preserve its natural and cultural riches. and to increase visitors' understanding of the site's significance.

Moreover, if the demand of a certain category of tourists is very strong to climb to the top of Uluru, the Anangu urge visitors not to give in to this temptation.

Before visiting the sites of Uluru and Katja Tjuta, visit the Cultural Center made by the Anangu, in order to understand the links which unite the Aborigines to these places.

add a comment of Uluru-Katja Tjuta: Nature and Culture