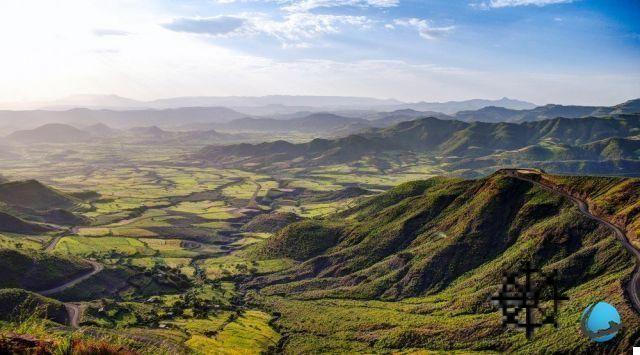 Go for an exceptional hike in the Ethiopian massif

Ras Dashan is one of the 10 highest peaks on the African continent. The landscapes of this region of northern Ethiopia are truly exceptional and will delight lovers of the great outdoors and wild nature.
The Simien National Park which surrounds it has been recognized since 1978 by Unesco as part of the world natural heritage.

From its 4 meters above sea level, Ras Dashan dominates quite majestically the northern part of Ethiopia. However, you don't have to be a seasoned climber to reach your summit.

Indeed, its ascent does not present any notable technical difficulties: an experienced hiker in perfect physical shape should be able to reach it without any problem and without having to make inconsiderate efforts. It is a relatively uncrowded place, but whose beauty has nothing to envy to certain sites of the Himalayas or the Andes.

This tranquility will also greatly appeal to travelers who have had enough of mass tourism and who want to discover extraordinary places without risking stepping on each other's toes.

Le Simien, a national park worth a visit

The Simien National Park covers more than 20 hectares, in a setting that seems straight out of a science fiction film. It is erosion that, after millions of years of hard work, has sculpted these rugged landscapes and rocks that seem to want to challenge the heavens and the gods. Perhaps this is why local people believe that Ras Dashan is inhabited by evil spirits and that they only venture to its summit on very rare occasions.

The fauna of Simien National Park is quite rich and diverse. Animals that can hardly be found anywhere else have taken up residence there, such as the “walia ibex” ibex, the gelada baboon, the caracal (a species of lynx) or the Abyssinian wolf. The many rocky cavities of this vast area are ideal shelters for them.

From 1996 to 2017, the Simien National Park was considered a natural heritage in great danger by Unesco. What it is no longer today, thanks in particular to the efforts of the authorities to reduce the nuisances caused by excessive grazing, livestock and agriculture being one of the only means of subsistence of its inhabitants.

Unforgettable hikes in the heart of the Ethiopian massif

If you are a trekking enthusiast, you will therefore have a lot of fun venturing into the Ras Dashan region. And if you needed a good additional reason to prepare your trip to Ethiopia, know that specialists even consider that the long hikes that can be done there are among the most beautiful on the planet.

You will undoubtedly be amazed and impressed by its gigantic cliffs, some measuring over 1 meters high. If these lands are relatively sparsely populated, you will certainly meet some shepherds during your crossing of Simien National Park and your ascent of Ras Dashan. They will generally be welcoming and maybe even invite you to their village to rest a bit if you need it ...


The language barrier will of course be an obstacle to communication (there are no less than 100 dialects spoken on Ethiopian territory), but a simple smile or a hello will already be an enriching human experience, for you and for them.

Northern Ethiopia has no shortage of major cultural sites. The historic cities of Axum, Gondar and Lalibela are thus located within a radius of 150 kilometers from Ras Dashan.

Finally, a few kilometers from its summit, you can see the ruins of an old military fort, which was probably installed there for the strategic position of the place.

Ethiopia, an emerging destination in Africa