Tokyo: the essentials before visiting the Japanese city 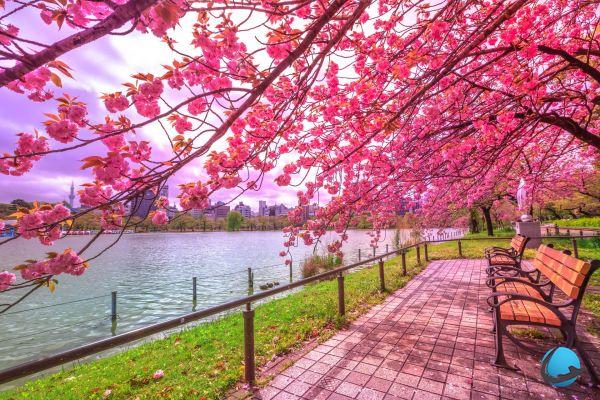 To present Tokyo, we often contrast its ancient traditions, its folklore, against its thirst for modernity and technology. But the Japanese capital, the most “high-tech” of Asian cities, actually offers a surprising fusion between these two faces.. Moreover, visiting a Senso-ji temple in the Asakusa district, then the shops crowded on weekends in the Harajuku district, are enough to be convinced. Here is our mini-guide which will help you to visit Tokyo in all its facets!


Is Tokyo a recent city?

Tokyo, the administrative capital of Japan, has always been, over the ages, the main city of the Japanese archipelago. Stronghold of many emperors, Tokyo has retained some of this heritage, although it was hit hard by the bombings of WWII. Put under American supervision until 1951, Tokyo took the opportunity to rebuild itself. She offered herself a more modern face and the city has become a very attractive vacation spot. 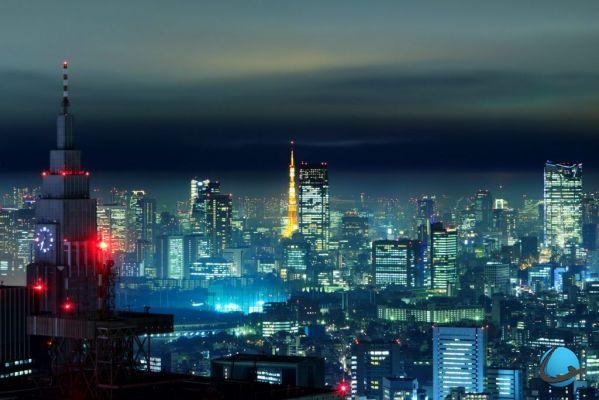 When is the best time to visit Tokyo?

Tokyo enjoys a temperate climate, marked by the presence of the monsoon. The winters there are cold and the summers very hot and rainy. The ideal is therefore to favor the inter-seasons. The best time to visit Tokyo is spring. You can admire the cherry blossoms and enjoy the pleasant warmth. However, we advise you to absolutely avoid Golden Week. This succession of public holidays between the end of April and the beginning of May marks the only real week of vacation for the Japanese: prices are soaring and most tourist sites are closed. 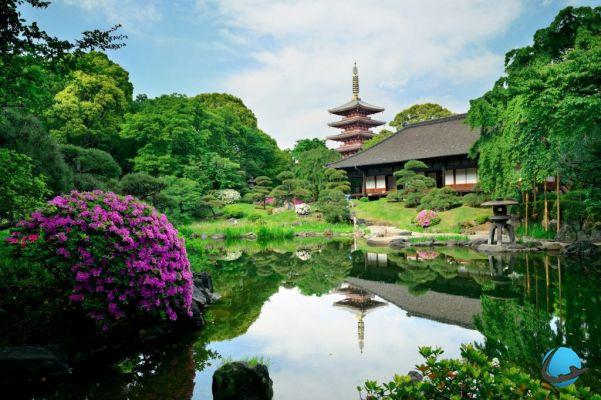 Calmer because less touristy, visiting Tokyo in October or November can be a great idea. The weather was then superb and the temperatures pleasant. In the parks, the trees are adorned with flamboyant colors and, taking a little height, you can see the magnificent Mount Fuji. If your budget is very tight, it's best to visit Tokyo in summer. The airlines then charge very attractive prices, as do the hotels in the capital. To ward off the heat, water sprayers and air conditioning breaks will be required!

What budget is to be expected for your stay?

There are as many budgets as there are travelers. Nevertheless, know that the Japanese capital is expensive, about 30% more than Paris. Here is the budget to plan per day and per person, in order to be able to visit Tokyo serenely:

What monuments and curiosities are there to visit in Tokyo?

Visiting Tokyo is both to rub shoulders with the Japan of yesteryear with its millennial traditions and to leap into the future. In this city of a thousand facets, you will be spoiled for choice to occupy your days. You can climb to the top of Tokyo Tower for an exceptional view of the whole city. The perfect place to go shopping is the Shibuya district, with its Kawaii boutiques and bustling streets, it is a hotbed of Tokyo youth! Do not miss the famous crossroads where several thousand pedestrians cross as soon as the snowman turns green! 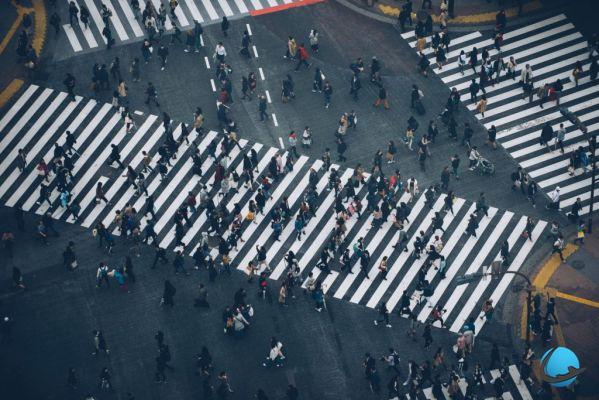 The Shibuya crossroads in Tokyo

You will also be amazed at Meaning-ji in the Asakusa district. The oldest temple in Tokyo is an extraordinary and very photogenic place. Prefer nightfall to see all the buildings light up ... a magical moment in perspective! Need to recharge your batteries between two visits? Take a break in the shade of a cherry tree in the Ueno Park, the green lung of Tokyo. Then pace Takeshita Dori, a pedestrian street unlike any other, where eccentricity and looks from another world are in the spotlight! 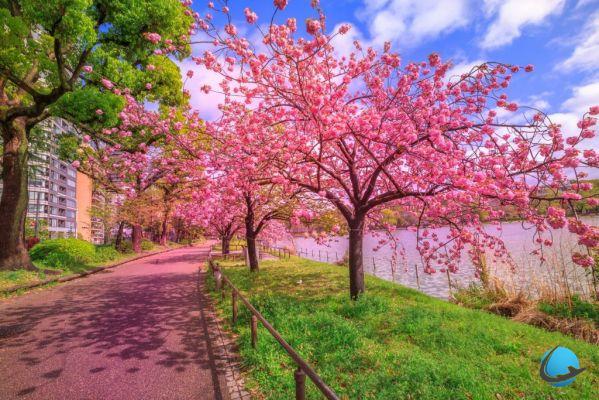 Also meet at the sanctuary Meiji-jingu, an architectural marvel with its torii of raw wood and its richly decorated facades. A real oasis of calm close to the Shibuya district! Also drop by the neighborhood of Yanaka. With its cobbled streets and small wooden houses, you will be immersed in the Tokyo of yesteryear. Fans of shopping, and especially good bargains, will be sure to visit the electronics district in Akihabara. You can find state-of-the-art high-tech products there, at prices sometimes much lower than those in France. Finally, before finishing the trip, a last boat trip on Tokyo Bay is in order. Restful, it offers a unique point of view on the skyscrapers of the seafront. 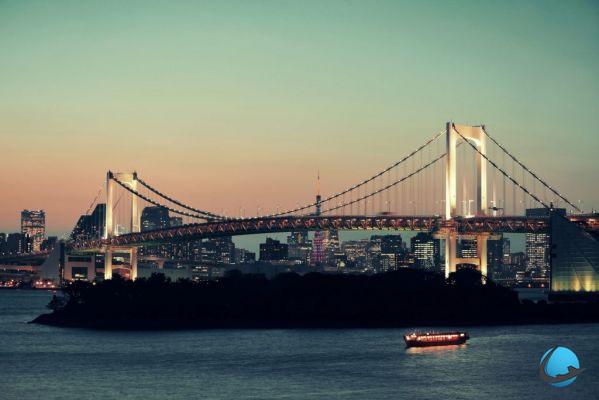 How to get around the Japanese capital?

As the city of Tokyo is very large, a very extensive public transport network has been set up by the municipality. In addition to your feet, the train and the metro are therefore the preferred means of transport to visit Tokyo. You can be scared when you see the map, as there are so many lines and stations, but rest assured, the network is very well organized and logical. Each line has a color and a name, written in Japanese as well as the Latin alphabet. Each station is designated by a circle in the color of the line, surrounding the initial of the line name and a number. For example: “G10 - Kyobashi” indicates that Kyobashi station is the tenth station of the Ginza subway line. 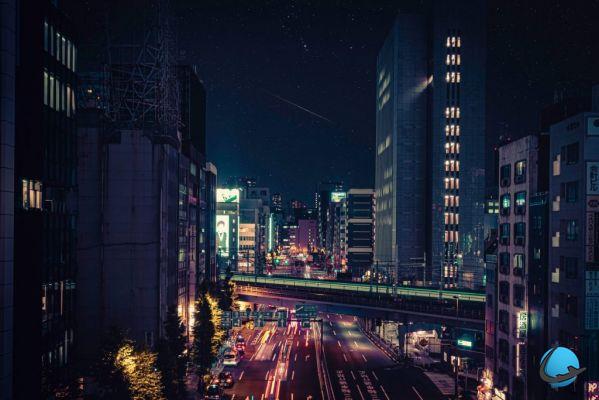 Visiting Tokyo by public transport can quickly get quite expensive since the tickets are paid according to the distance traveled or the number of stations. The base fare for a single trip is ¥ 130 (approx. € 1,08). It is therefore quickly interesting, and above all much more practical, to take a Suica card (or the equivalent: Pasmo, Icoca etc.). A sort of electronic purse, it can be used without contact. You can buy one on arrival (the amount is refunded if you return it at the end of your stay) and recharge it at any terminal. These cards also offer a 5% reduction on all journeys. Be careful, however, during rush hour, metro trains are often overloaded!

To organize your trips and find out the timetables, your best bet is to download the Hyperdia mobile app or even use Google Maps.

What is the best neighborhood to sleep in in Tokyo?

A sprawling and very large city, it is very important to choose the right neighborhood to visit Tokyo in the best conditions. Like most travelers, you will probably only be staying a few days in the capital and it would be a shame to waste time in transport unnecessarily. Here are the neighborhoods to favor, according to your desires:

Cheaper hotels than before?

Built around the bay of the same name, the city of Tokyo is immense, sprawling, to such an extent that it is difficult to designate a true “downtown”. However, with the density of public transport, choosing your accommodation shouldn't be too much of a problem. Once considered very expensive, Tokyo hotel rooms are now more economical, and even inexpensive during certain periods.. The more daring visitors will try their hand at capsule hotels, where the rooms are sort of boxes 2 meters long by 1 meter wide… Be careful, claustrophobic refrain! 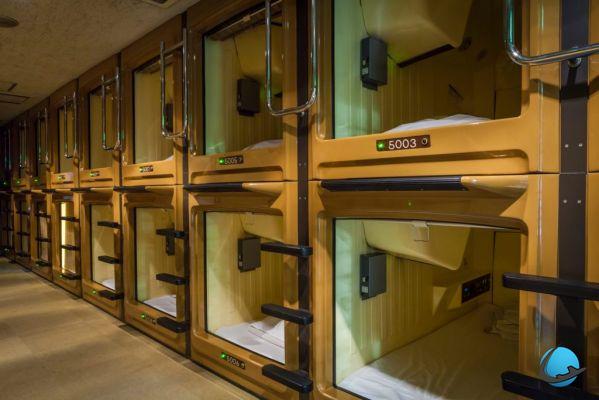 A capsule hotel in Tokyo

What are the culinary specialties of Tokyo?

To capture part of the Tokyo atmosphere, visiting Tsukiji fish market is a must. It is the largest such market in the world. The influence of the sea is also found in Japanese gastronomy, the most emblematic dish of which is le sushi. It is a very popular dish in Japan and the opportunities to eat it while in Tokyo should not be missed. The restaurants also offer sashimi, slices of raw fish presented without rice, and Tempura lessons, fish, shrimp or vegetable fritters served with noodles or rice. 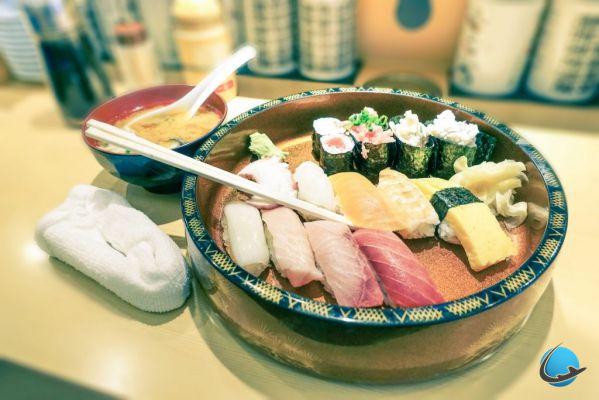 Where to go out at night in Tokyo?

In contrast to these centuries-old traditions, Tokyo offers, like all large cities, its share of bars, pubs and nightclubs. The Ikebukuro district is particularly lively at night. Young people from Tokyo meet there and go out to bars clustered around Ikekuburo station and along “Sunshine 60 street”. Not far from there, the arteries of Roppongi also welcome tourists, like the inhabitants of Tokyo, in many leisure establishments. 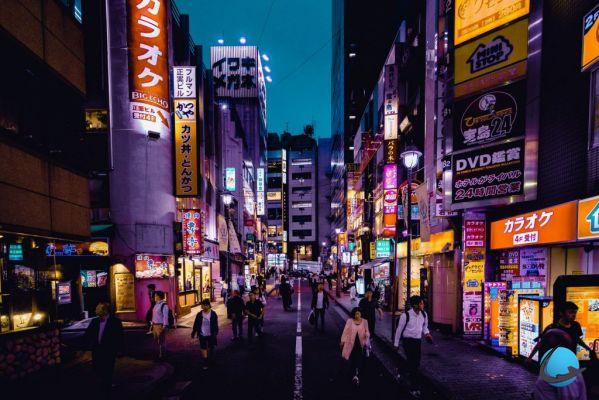 Other information to know before visiting Tokyo

Here are the answers to the questions you are probably asking yourself about the capital of Japan.

What is the population of Tokyo?

What are the inhabitants called?

The Japanese call them men Azumaotoko, “Eastern man” and women Kyoonna, “Woman of the capital”. The term Edokko, literally “child of Edo”, historically designates the natives of the city when it was still called Edo. This term is still used to refer to the native inhabitants of Tokyo and whose ancestors were born in the capital for several generations. 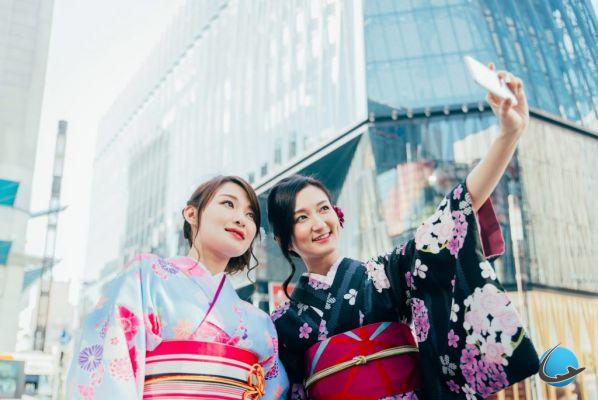 How to get to Tokyo from France?

The city of Tokyo is served by two airports, called Tokyo-Haneda and Narita. They both cater for international flights, but Haneda is more preferred by low-cost carriers and domestic flights. From the airport, shuttles or taxis take you to the city center.

How many hours of flight from Paris?

Depending on weather conditions, flight time between Paris and Tokyo is about 12 hours. Air France now offers a daily A380 trip.

What traditional souvenirs to bring back from Tokyo?

Japanese tradition is expressed through Shinto temples and shrines, one of the main Japanese religions. As such, it is the Asakusa district that best testifies to the time of the emperors in Tokyo. In addition to the Senjo-ji temple, we find old buildings and traditional stores that offer a unique shopping break. For example, fans can be bought there, called "uchiwa" or "yukata", kinds of light and generally inexpensive kimonos.

Want to go visit Tokyo? To make your stay a success, here is our practical information:

Experience the cosmopolitan city of Tokyo!

Discover must-see Tokyo tours and soak up Japanese culture. An unforgettable stay awaits you in the Japanese capital!

Top 10 cities to discover while traveling in 2013 ❯

10 must-see places to see in Tokyo

Add a comment from Tokyo: the essentials before visiting the Japanese city