This plane saves you hours of sleep

The Airbus A350 XWB, an aircraft that wants you well

With its new aircraft, the A350 XWB, Airbus intends to take care of passengers who will benefit from innovative anti-jetlag technology. Enough to make you want long-haul trips, right? 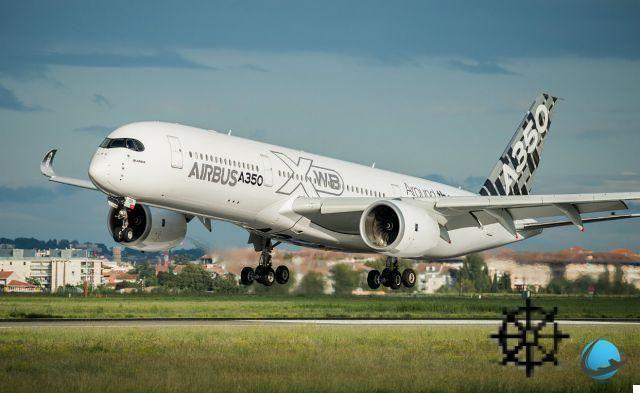 After having shared magnificent airplane photos with you, let's stay in the aeronautical field with the latest Airbus innovation in terms of well-being and comfort. The aircraft manufacturer has effectively spent 15 billion euros to equip its new aircraft the A350 XWB with an anti-noise and anti-jetlag system.


An airplane to fight against the jetlag

The first technology put forward concerns cabin lights. LED diodes simulate the variations of the sun, thanks to 16,7 million colors. Their glow adapts to the ideal sleep rhythm to adopt during the journey. The goal is to reproduce the biological rhythm of melatonin, this hormone which decreases as the light decreases. The body would then synchronize more easily with the time zone of the country of arrival.

Another advantage for travelers is relatively low cabin pressurization, which is supposed to promote sleep for passengers. The design of the aircraft has been designed with much wider wings than on models of similar size aiming to reduce flight noise and create a more favorable environment for naps. This is also the case for the air filtration system, developed to renew that of the cabin every three minutes.

To be able to fly lower than its competitors, the aircraft is built 53% from carbon fiber. This has a second advantage: lower fuel consumption.

The Qatari company, Qatar Airways, is for the moment the only one to offer flights in this plane since the delivery of its first aircraft in December 2014. It serves in particular Doha, Singapore, New York and Frankfurt. And of course, other companies should follow suit in 2016. Come on, all you have to do is book your flight!

Original ideas to share your trip (other than on social networks)

Add a comment from This plane saves you hours of sleep