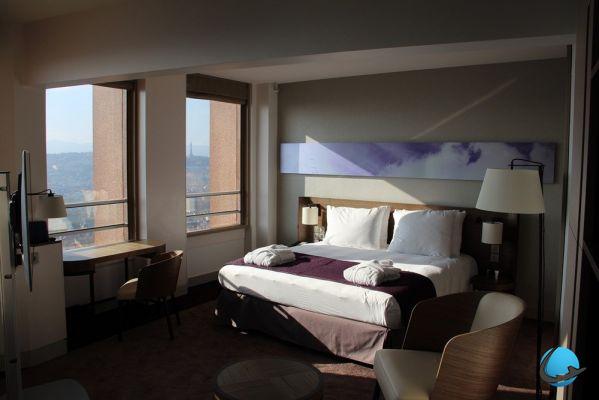 The Radisson Blu offers a breathtaking view of Lyon

Le Crayon is one of the emblems of Lyon. The one we call this is actually the Part-Dieu Tower, 165 meters high and inaugurated in 1977. And in the mine of the famous pencil, from the 32nd to the 42nd floor, the Radisson Blu Hotel welcomes travelers from all over the world in a beautiful setting.


After about 3 years of work (for a budget of around 40 million euros), the Radisson Blu reopened its doors in the fall of 2016. The one that presents itself as the highest hotel in Europe - 144 meters above the ground! - offers a breathtaking view of Lyon. Did you already know the panorama offered from Fourvière hill? This is nothing compared to the view offered by the 4-star establishment located in the Part-Dieu district.

245 rooms to sleep with your head in the sky

This panorama and this “altitude” are the hallmarks of the hotel. In fact, the new interior decoration is centered around the “levitation” theme. In the 245 rooms of the Radisson Blu, the design has been expertly studied, with clever sets of mirrors and rounded shapes everywhere for more softness. The large bay windows bathe each room in light and allow you to take full advantage of the clear horizon. Towards the Fourvière hill for the lucky ones, the third arrondissement or the Incity tower for the others.
Another example: the headboards take the shape of clouds, to give the impression of sleeping in the heavens.

In terms of colors, we find saffron and warm tones in the 182 21m² standard rooms, eggplant and purple in the 30m² business and superior rooms. And in the woodwork, walnut and cherry are in the spotlight. Noble materials that reinforce the impression of comfort and high-end.
4 star hotel obliges, the equipment has been revised upwards: large queen size and king size beds (depending on the room), Smart TV from 48 to 55 inches, espresso machines, functional bathrooms with shower or bathtub, etc.

On the price side, count a minimum of 150 euros per night about.

➡️ Book your room at the Radisson Blu Hotel by clicking here.

Le Celest, a bar-restaurant in the clouds

Tourists passing through Lyon and clients of the Radisson Blu Hotel are not the only ones who can enjoy the unique view from the 32nd floor. The places also house the Celest Bar & Restaurant (formerly l'Arc-en-Ciel). A name always close to the heavens for an upscale establishment that wants to transform your meal into a culinary experience.

Here, the prawns can be served on hot pebbles, the dishes brought in steaming glass bells to reveal themselves before your eyes at the last moment. Leader Bruno Vitrac offers a creative cuisine and revisits the French tradition by giving it an international aspect. South American and Asian spices and condiments allow you to discover new and refined flavors, for menus available from 22 euros at noon.
There is also a premium snacking offer, with XXL salads at 13 euros and burgers at 21 euros.


The wine list (very wide) and that of cocktails also promise great discoveries. Antonio Oliveira, one of the best mixologists in Europe, gives his paw: no way, therefore, to drink a “simple” mojito drowned in ice cubes as is the case in too many bars! The aptly named “Lyon le Ciel” - definitely! - is for example a clever blend of Piper Heidsieck champagne, blue curacao, passion fruit juice, pineapple juice and house rosé wine syrup. To be enjoyed in moderation, of course.


Price wise, these cocktails are offered from 14 euros. But it is also possible to opt for wines by the glass from 6 euros or mocktails (without alcohol, therefore) at 11 euros.

Lyon, one of the most attractive cities in Europe

With the Radisson Blu Hôtel and the Celest Bar & Restaurant, Lyon is strengthening its attractiveness a little more. The capital of Gaul is often cited as one of the nicest European cities at the moment.

2016 was a prosperous year in this respect, since Lyon was elected “best weekend destination in Europe”During the World Travel Awards 2016. It also saw the inauguration of a Hard Rock Café and its Festival of Lights in December still promises a lot.

These 20 photos will make you want to go to Essaouira ❯

10 things not to miss in Corsica

6 nature getaways to do around Montpellier

What to do around Lyon? 11 must-see visits!

5 tips for booking your train ticket at a low price