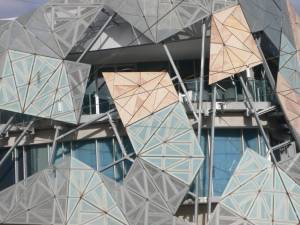 architectural detail of the square

Federation Square, at the crossroads of Flinders and Swanston streets, is one of the great central squares of Melbourne.

Although this project has not attained the fame of the Opera House in Sydney, it clearly demonstrates the surge of innovation and creativity of the major Australian cities, and undoubtedly marks the visual identity of Melbourne.

The modern Federation Square complex, opened in 2002, is the result of a major architectural competition launched by the city in 1997 to build a state-of-the-art "civic and cultural" space on the site of former railway.

Of course the construction of this project was very controversial.

Having fallen behind schedule, the project exceeded the planned budget by an amount of 200 million dollars and criticism of the site's design and architectural innovation never ceased! 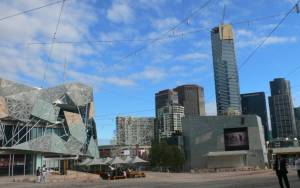 the triangles and pyramids of Federation Square

Today the complex is an important point of life for the inhabitants of Melbourne.

Many events are organized in the main square.

It is also the center of the tourist office where you will find a lot of information on all the attractions of the city.

The complex also houses the Australian part of the National Gallery of Victoria, the cinemas of the Australian Center for the Moving Image and numerous restaurants. 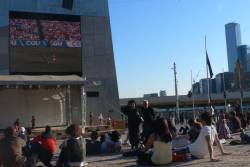 Our tip ! If you haven't had the time or luck to grab a ticket to Melbourne's famous Footy matches, head to Federation Square and sit in front of the giant screens broadcasting live! The atmosphere will certainly surprise you! 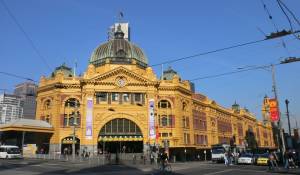 
To illustrate the mix of styles specific to Melbourne, opposite Federation Square, you can admire the famous Flinders Street station.

Built in 1907, it is still Melbourne's transport hub and will connect you to all of the city's suburbs and Victoria.

Behind you, Saint Paul's Cathedral is also one of Melbourne's historic buildings.

add a comment of The place de Federation Square