If most Spaniards and tourists agree that the famous Sagrada Familia is the cathedral of the angels, the reality is not so far from this fact. From its full name, it is called Expiatory Temple of La Sagrada Familia.

This superb Gothic church is considered both a medieval masterpiece and a historical monument, a rich heritage. What makes its reputation?

Its reputation, it owes it first to the fact that it was the work of the famous architect Antoni Gandi, who wanted to build not only a church dedicated to the Holy Family but at the same time a gigantic basilica worthy of the seven wonders of the world.

The challenge could have been taken up if the illustrious architect had not been knocked down by a tram and died in the middle of construction. Fortunately, he had left behind him detailed plans of his project and the construction was able to resume its course.

However, it must be admitted that his "plans" were not scrupulously followed by his successor Subirachs, who over time changed them in favor of some modern inspirations.

The result certainly promises to be conclusive since the church is not yet ready to be completed for its next ten years. The end of the work is scheduled for 2040, so we are still a long way off.

But that does not prevent tourists from admiring this magnificent building which presents a marvelous spectacle in the heart of Barcelona. Access is not prohibited if you want to take a look at it, an elevator allows all visitors to climb to the heights. 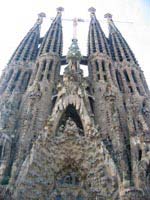 Fleches of the Holy Family

The Sagrada Familia rises in the north of Barcelona. Its bell towers overlook the city.

The jibs of the cranes are part of its architecture, begun in 1882, it remains one of the major construction sites in Barcelona.

The promoter of the temple, Josep Bocabella, had commissioned the architect Francisco de Paula de Villar for its construction, he was replaced by Gaudi in 1883.

The Temple of the Sagrada Familia is the work of a lifetime. The current works are based on the models and the indications of the architect. 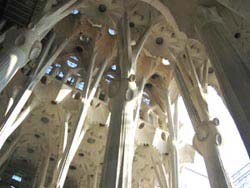 Naf of the Holy Family

The "fachada del nacimiento", entirely produced under the direction of Gaudi, seems to "unite earth and sky".

The tympanum is loaded and rocky; the four steeples, with plant shapes, seem to spring from it.


Natural forms are one of the keys to temple architecture. Snails adorn the apse, a turtle supports a pillar, and the nave is a forest where the columns branch out to form the vault. 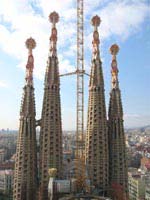 An elevator (2€) gives access to the 65m level, you can also take the stairs. The view of the city and the Torre Agbar is magnificent.

The spiral staircase offers surprising perspectives of the architecture of the temple.

Madrid in unusual mode: 6 visits to visit the city differently

Visit Ibiza: our advice for travelers!