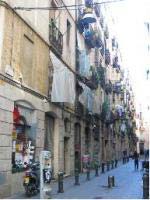 The area around the Cathedral is the “Gothic Quarter”.

Many balconies adorn the facades in the small, narrow streets of this area of ​​Barcelona.

It is good to stroll around, linger in front of the windows or randomly enter one of the small bars that populate the “Barri”*.

It is also in this area that we discover the oldest vestiges of the city.

The City History Museum shows that the "Pla de Barcelona" was occupied by small settlements in the XNUMXth, XNUMXrd and XNUMXnd centuries BC

The Romans then arrive, and Barcelona becomes the Roman colony of Julia Augusta Favencia Paterna Barcino, it is part of Hispania Citerior.

The capital of this region was Tarraco - today Tarragona. Remains of walls, of the temple of Augustus and of constructions are still visible and the museum of the history of the city presents many vestiges. 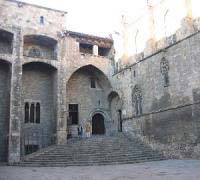 The square overlooking the city's history museum is cool and calm, almost silent.

In summer you can have a drink on the terrace while admiring the architecture. This architecture is Gothic and dates from the Kingdom of Aragon.

After the invasion of Barcelona by the Visigoths from the North, by the Arabs, then by the Franks (801), Catalonia entered a period of expansion following the marriage of Ramón Berenguer IV with Petronille.

The Barri Gotic is like an island in the middle of the city. It bears witness to the centuries of splendor of Barcelona, ​​between the XNUMXth and XNUMXth centuries.

The Cathedral is the center and many interesting buildings surround it. For example, the Casa de l'Arcadia houses the historical archives of the city.

It is located in the Casa Clariana-Padellas. This house has been moved stone by stone from Carrer Mercaders and rebuilt identically to its current location.

Continuing the walk you can also discover the Barrio del Call, between Carrer de Ferran and Carrer de Jaume I.

This is the medieval Jewish quarter, one of the city's most prosperous from the XNUMXth century until Spain expelled the Jews from the country.

There are some of the oldest houses in Barcelona.

The Barri Gotic is bordered by La Rambla to the west, Ferran and Princesa streets to the south. The Jaume I and Liceu metros provide easy access.

Museum of History of the city

Walking tour of the Gothic Quarter

A bike tour is the perfect way to see all the sights of Barcelona while enjoying the great outdoors, the warmth of the sun, and good company.

For more than three hours, your guide will introduce you to the Gothic Quarter, the Old Port, the Cathedral, the Citadel Park, the Olympic Port and the Sagrada Familia. You will not be exhausted by this visit which takes place at a very peaceful pace, leaving you time to take many photos as well as many refreshments!

* Entrance to the Chapel of Santa Agata

Back to guided tours >>

add a comment of The Gothic quarter – Barri Gotic