Covering nearly fifteen thousand hectares, bathed in unbearable heat and whipped by an increasingly impetuous wind, the Agriates desert in Corsica is an immense landscape worthy of its name: the typical example of this which can be described as a desert.

Located in the northwestern part of the Nebbio, between the Balagne and Cap Corse, there are carved granites, huge ridges, rocky peaks and valleys.

Isolated, desolate but yet magnificent, its landscape made of red and ocher stones combined with the deep blue of the Mediterranean Sea offers an impregnable panorama that one would think straight out of a painting.

One finds on the site of old constructions made of dry stones testifying to the passage of the old shepherds who brought their cattle there.

If you start from the coastal path, you come across the old Genoese tower in Saint-Florent, the Tour de Mortella, which was built in the 16th century. Over the hikes, taking a dip in one of the magnificent beaches of Agriates becomes an obligation.

For beaches, you are spoiled for choice between Loto beach, Saleccia beach and Ostriconi beach. There are only two passable tracks in the desert and to take them, it is better to use off-road cars to avoid problems.

But the best thing is always to explore this site on foot, some places are only accessible by foot. However, if you don't feel up to three days of walking, for full moon nights, you can always opt for bike rental!

It was the writer Pierre Benoit who magnified this region in his book "Les Agriates", but it was the Corsicans who wrote the most beautiful lines. Today officially recognized as the only true European desert, the Agriates are one of the most extraordinary regions of Corsica!

Spread between Alliso and the country of Ostriconi, the Agriates, with their 16.000 ha, were for a long time a rich land of cultivation and livestock.

Even more: the Genoese who held Corsica under their thumb for a long time, made this region their breadbasket and olive grove.

Until the beginning of the century, farmers worked between the thousands of olive trees; still cultivated wheat; harvested almonds, lemons and figs; … 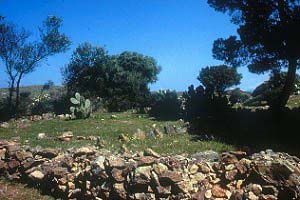 Even today, you can still sometimes see, invaded by the maquis, an old threshing floor or an old abandoned farm, surrounded by elms and centuries-old olive trees.

The Agriates were also a great land of transhumance. In 1888, there were still around a hundred flocks of sheep or ewes.

But the successive waves of emigration, the harshness of life in the region, the financial difficulties and the Great War which left here more widows and orphans than arms to work were right for life in the Agriates which began to to desert.

Here and there, old stone walls still bear witness to an agricultural activity that has been forever abandoned.

Today, the Agriates Desert is the favorite ground for nature lovers. The Agriates flora is particularly rich, diverse and colorful: hikers, horse riders, joggers, mountain bikers, ... appreciate the poetic harshness of the landscape, but also beaches (including the extraordinary pristine beach of Mafalco or the long beach of Saleccia) among the most beautiful on the island.

The Phantom of the Opera performing ❯

What to do in Nice? 11 must-sees in Nice

Visiting Bayeux: what to do and where to sleep in Bayeux?

What to do around Dijon? 7 getaways not to be missed