You can experience panoramic views of Sydney from the top of Sydney Tower, the city's tallest structure. The views are breathtaking from the observation tower over Sydney Harbor and Sydney's bustling city center to the Blue Mountains at Botany Bay. 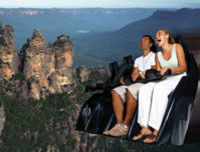 Sydney's skyline has changed dramatically over the past quarter-century, but Sydney Tower remains Sydney's most significant must-see landmark. More than double the height of the Sydney Harbor Bridge, and six times higher than Niagara Falls, Sydney Tower soars 260 meters (880 feet) into the sky and remains one of Sydney's most popular attractions. 'Australia.

As a bonus for each visitor undertaking the ascent to the top of the Sydney Tower, is offered a trip on board OzTrek. You can enjoy the largest simulated race in the southern hemisphere, OzTrek with its holographic 3D features, 180 degree cinema screens, and amazing surround sound.

Starting point :
Located in the heart of the city, Sydney Tower is easily accessible by public transport or car. You can enter at 100 Market Street and take the elevator to the Podium level.

We have been able to provide in 96% of times, the solutions that users were looking for when consulting our page.