South Bank – On the Shakespeare side 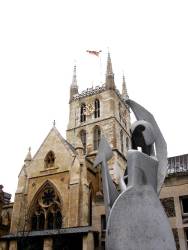 The south bank of the Thames was a place of entertainment for Londoners until the closure wanted by the puritan Cromwell.

In the XNUMXth century, the area was occupied by warehouses and wharfs, but now the left bank of London has once again become a major cultural center.

It's as if Shakespeare and the Bishops of Winchester are back!

In the time of the Bard, the famous Bishops of Winchester earned colossal incomes from theatres, pubs, burials and male entertainment…

Shakespeare himself paid a small fortune to have his brother buried in the morning, not in the afternoon. The author of Hamlet wanted his actors to attend the funeral at all costs.

In 1997, the Globe Theater was rebuilt identically 200 meters from the site of the Shakespearean theatre, burnt down in 1614.*

The cause of the disaster: a cannon used in the orchestra.

The new Globe is covered by a straw roof, a first in London since the great fire of 1666!

In the Globe Theatre, a museum explains the stages of reconstruction, shows the costumes of the actors and reveals the secrets of the special effects of the Elizabethan theatre.

Our proposed activity: Visit of the exhibition of the theatrical world of Shakespeare 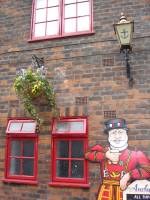 However, do not forget that the first attraction for the 3000 spectators of the Globe (yes, they were in a hurry!) was the language of Shakespeare.

No one has enriched the English language more than he.

Undoubtedly, its actors spent hours in pubs to learn their roles by heart. 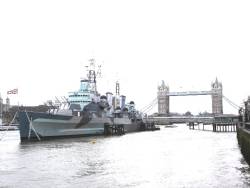 To explore the South Bank, choose a sunny morning and walk the Millennium Mile.


From Tower Bridge you will discover the other side of the Thames: a battleship which took part in D-Day, Sir Thomas Drake's ship, the cathedral where Edward, brother of the great William, is buried, the locations of Shakespeare's theaters and of his rival Marlowe. 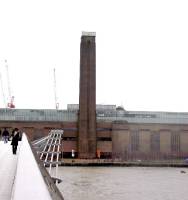 Before arriving at the Tate Modern and the Globe Theatre, you can make a detour to Vinopolis, a wine museum which offers wines from all over the world, or visit the macabre London Dungeon, a museum of prisons and crime.

It's understandable if you prefer the good restaurants of Gabriel's Wharf or the view of the London Eye to recover your strength before going to listen to a concert in the 2500-seat hall of the South Bank Center, the largest cultural center in Britain.

Flamenco show in Malaga with a drink ❯

add a comment of South Bank – On the Shakespeare side