Step back in time at the UNESCO-listed Tower of London. The priority access ticket allows you to see the White Tower and the fabulous Crown Jewels, and entitles you to a guided tour led by one of the famous guides, or "Yeomen". Book your ticket in advance and avoid the endless queues, at no extra cost. On vacation, don't waste your time waiting! 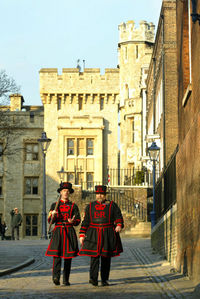 The ancient stones of the Tower of London reverberate with dark secrets, where priceless gems sparkle in fortified vaults guarded by corbels. Founded by William the Conqueror in 1066, expanded and modified by successive rulers, the Tower of London is one of the most famous and spectacular fortresses in the world.

Discover the Tower with its 900 years of history as a royal palace and fortress, prison and place of execution, armory and menagerie. Don't miss the highlight of the show with a visit to the dazzling Diamond House, where you can see some of the most important diamonds and their stories in the world set into insignia used for the crowns of Britain's sovereigns.

The Tower Guards «Yeoman » :
Yeoman Warder (popularly known at 'Beefeaters') are the ceremonial guards of the Tower of London. Join a free tour and be entertained by tales of the Tower, pain and passion, betrayal and torture, all delivered with a swagger and a smile! Tours depart every 30 minutes until 15:30 p.m. (summer) or 14:30 p.m. (winter). Each tour lasts approximately 60 minutes and starts from the main entrance.

Starting point :
The Tower of London is located on the eastern border of the City of London, next to the River Thames and Tower Bridge.


Departure time :
By pre-purchasing your ticket online, you can skip the long lines (which can take up to two hours!) It's quick and simple. We recommend 3 hours for your visit.

add a comment of Skip the Line: Tower of London Skip-the-Line Ticket