Sibenik and its cathedral 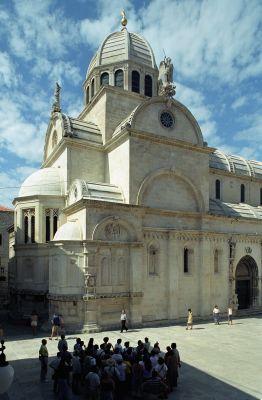 Unlike many cities in this part of the Adriatic, Sibenik is not a town with a long Greek, Roman and then Byzantine tradition, but a new town designed to counter Byzantine Dalmatia around the XNUMXth century. However, the history of Sibenik is closely linked to that of another great Balkan power: Turkey, which was in turn the closest neighbour, a fierce enemy and then a decisive economic partner in the development of the city.

Strongly affected both by the Second World War and by the bombardments of the war of the 90s, Sibenik had to make a considerable effort to restore many of the monuments which are today its pride. We could thus cite the loggia, seat of the city council during the Venetian period from 1533 to 1542, as well as of course the monumental Saint-Jacques cathedral, a masterpiece of Renaissance architecture in Croatia with its dome in one-of-a-kind design.

As you can see, Sibenik is full of sacred or pagan monuments and it will take you several days if you really want to take an exhaustive tour of the riches of this city of some 42000 inhabitants. Stroll up the hill which will take you to the castle and the city walls from where you will understand the organization of the city. Take a tour through the Saint-Nicolas fortress which guards the maritime mouth of the city. As you can see, there is plenty to see in this small town on the road to Split or Zadar where the number of tourists is still bearable. A small pleasant port with a dense historical richness, Sibenik is not the least typical of small Croatian towns, an essential stopover before approaching the surrounding islands (Murter, the Kornati archipelago) or the Krka waterfalls...

Cruise to Elafiti and Green Islands from Dubrovnik