Whether you're visiting London for the first time or you live in the city, there's no better way to experience the attractions of the capital than with a Thames Clippers Roamer River Ticket on the River Thames.

With a Thames Clippers River Roamer ticket you can take a hop-on hop-off bus on the banks of the River Thames between Millbank Pier at Royal Arsenal in Woolwich including Waterloo Pier, Embankment Pier, Tower Pier, Canary Wharf, Greenwich Pier and The O2, London's most popular venue for concerts and events, currently hosting the hugely popular exhibition – Tutankhamun and the Golden Age of the Pharaohs.

Create your own London itinerary and cruise the Thames, hop on and off as you please. 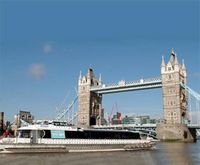 Starting point :
You can be on board the boat at any of the designated stops below: