In the small town of Ripoll, which has barely 30.000 inhabitants, there is a very pretty and particularly well-preserved monastery.

Founded by Wilfred le Poilu, who is at the origin of the Catalan flag (according to Catalan legend, injured during a fight, he would have scratched his golden crest with his four bloody fingers). 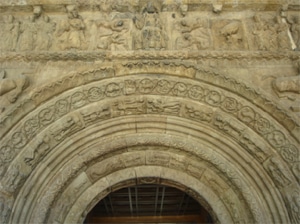 The portal reflects the concerns of the time particularly well since it is simply a guide for a good Christian:

indeed it retraces the path of the Christian towards eternal life.

Pay close attention to it, you may find the key to salvation there.

With a notable disadvantage compared to our predecessors:

the very bold colors that covered the portal at the time have disappeared and most of the forms have been eroded.

Between a lion the size of a cat and the agricultural calendar where wheat becomes corn, you will need both imagination and the ability to discern to find your way around.

The way to paradise 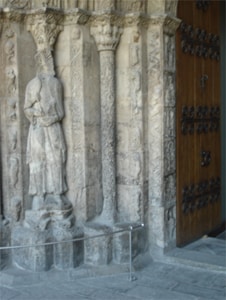 Then accept the few indications of your servant to avoid pitfalls and position yourself directly on the highway of paradise.

7 fringes cut out the portal and facilitate reading.

The first three represent the good, what must be done, the next 3 retrace the history of man on earth by placing on the left the way in which one must act according to God and on the right that which must be faced. difficulties in particular the struggle to defend his religion.

Scroll down a bit and everything you absolutely must not do is represented through the Seven Deadly Sins.


Fortunately the arcades deal with less terrible themes and you will find yourself under the benevolent eye of Saint Pol and Saint Pierre, incidentally guardians of the Churches, observing Catalan peasant life.

Finish your descent in the cloister to the soft sound of water, the road remains long. 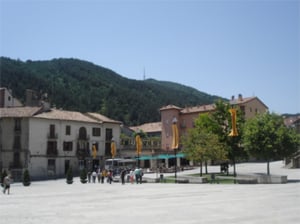 Ripoll is another friendly town in the region in which you will enjoy strolling after this beautiful visit.

It can also be the starting point for lovely walks in the surrounding forests.