Stroll through the markets in the Monstiraki area to see the city's classic Roman and Ottoman landmarks, including the Ancient Agora, and soak up the atmosphere in the Plaka district filled with cobbled lanes that wind past lots of ancient sights of the city on this private, three-hour walking tour of Athens. 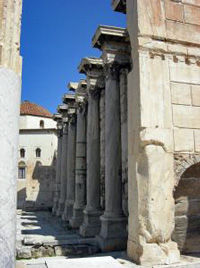 Going down to Mitropoleos Square, you can visit the cathedral, the construction of which began on Christmas Day in 1842. It remains a landmark, the great city and the site of important ceremonies, such as crowning of the royal family, weddings and the funerals of the rich and famous.

Continuing on to the Monastiraki district, you will also see other Roman and Ottoman monuments such as the Tower of the Winds, the Fethiye Mosque, the Madrasah, the Library of Hadrian and the Tzistarakis Mosque. After wandering through the quaint flea market, you will come to the Ancient Agora. Walk around the site which was first developed in the 6th century BC and visit the Agora Museum housed in the Stoa Attalos.

After strolling through Avyssinias Square, your journey will end at Athinas Road, where you can be drawn in by the sights and smells of colorful oriental food at the Spice Market.

Departure time :
09:30 (if you prefer another time, you must advise at the time of booking, changes are not allowed after booking)

Climate in Thessaloniki: when to go