The imposing dome of St. Paul's Cathedral has been a symbol of London, at least during the blitz of World War II, when it stood framed by the fires that raged through the city. A church has stood on the site since the 7th century and the current building, a masterpiece by Christopher Wren, was completed in 1708 after 32 years of work. The impressive interior contains memorabilia and monuments to many of Britain's heroes, including Nelson, Wellington and Churchill. The famous Whispering Gallery is well worth the climb, and the Golden Gallery (530 steps) offers stunning views of the city. 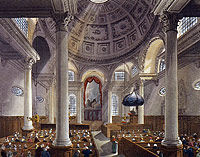 Christopher Wren built 53 churches after the fire of London in 1666 and 23 mansions. Among these, you will visit Saint-Etienne Walbrook and Sainte-Marie l'Abchurch. The former has a beautifully designed cupola, which no doubt served as the model for St. Paul's, St. Mary's Abchurch contains a wealth of artefacts including a massive altarpiece by Grinling Gibbons.

This private in-depth tour is led by a professional guide specializing in art history. Please list any special interests you have at the time of booking (art, architecture, history, culture) to alert our guide, so he or she can prepare for your private tour.