Porto, between Osprey and Genoese tower 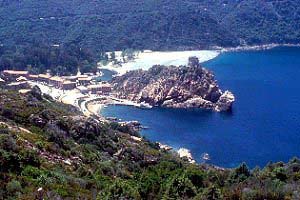 Administratively, Porto is a simple hamlet which depends on the village of Ota, located higher in the mountain.

However, if Ota is unknown to most lovers of Corsica, Porto, on the other hand, makes more than one dream of it …

Because its exceptional site has transformed this small town without history into an important tourist stop. 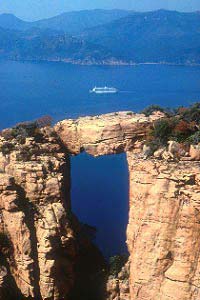 Today, it is by weaving between hotels, restaurants and shops overflowing with postcards, that one descends towards the small beach bordered on one side by the first buttresses of the Calanches de Piana and on the other by the bed of the river Porto (which gave its name to the village) and by the pretty Genoese tower, proudly perched at the top of its rocky peak, at the bottom of the Gulf of the same name.

The classified site of the Calanches de Piana is overflowing in summer with coaches and cars queuing to find a parking space.

It hurts the magic of the place, but if you are lucky enough to be able to park, you will quickly discover a handful of trails that allow you to get away and admire, away from the crowd, the strange shapes carved by nature in carmine granite. 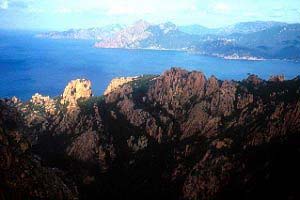 Integrated into the Regional Natural Park of Corsica, these creeks whose pretty colors change throughout the day are also the lair of protected animal species: the osprey is one of the birds that can be discovered here.

In another genus, the Cestoni mastiff (the biggest bat in Europe) or the Etruscan shrew are also among those species that can evolve in complete safety in this enchanting setting.


1: At the bottom of its gulf, Porto is just a small hamlet that has become an important tourist stopover

2: With the Mediterranean as a backdrop, the creeks of Piana constitute one of the most beautiful natural spectacles of Corsica

3: Games of shadows and light on the creeks of Piana

Praia do Forte – From coconut palms to the protection of turtles ❯

add a comment of Porto, between Osprey and Genoese tower