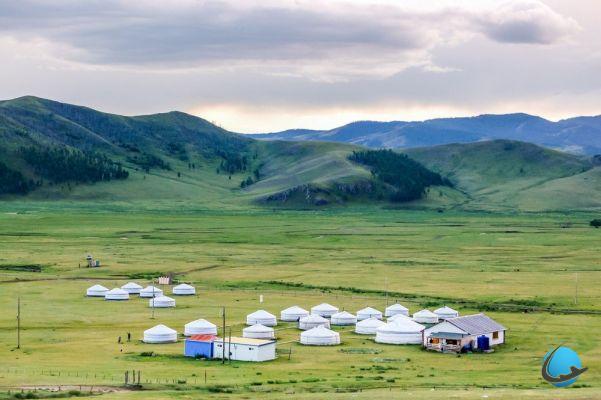 The land of yurts, horses and immense plains

Mongolia is a land that makes all lovers of wide open spaces and exceptional landscapes dream. With only 3 million inhabitants for an area of ​​more than 1,5 million km² (about three times the size of France), it is easy to understand why ...

A fairly harsh climate in winter

Stuck in the heart of the Asian continent, between China in the south and Russia in the north, Mongolia does not really have a good climate for human beings. If the summers are generally warm and pleasant, the winters are on the other hand terribly cold. During this time of year, temperatures drop regularly below -30 or even -40 ° C. It rains there very rarely (less than 300 mm per year).


Most of Mongolian territory is located over 1 meters above sea level, with peaks exceeding 4 meters in the Altai and the Khangai mountains. gobi desert covers a good portion of southern and eastern Mongolia.

Ulaanbaatar has the characteristic of being considered the coldest capital on the planet, with -2,4 ° C annual average. It is home to nearly a third of the country's population, and has struggled to cope with the rural exodus which has called many inhabitants to the city for several years.

But that doesn't mean that there aren't things of interest to tourists there and that they aren't well received. On the contrary ! Ulan Bator's most iconic monument - a must-see! - is surely the Gandantegchinlin Buddhist Monastery, the largest in the country. The city is also home to several interesting museums, such as the National History Museum and the Fine Arts Museum.

Get off the beaten track to meet new people

The best way to visit Mongolia and discover its different aspects is undoubtedly to opt for a sightseeing tour by car (a 4 × 4, preferably) with a local guide. The latter will allow you to meet much more easily the populations who live in the great steppes in the company of their horses and their cattle and who regularly move the yurts in which they live.
You will certainly be invited to share your meals and even some of your nights with the most welcoming of Mongolian families. Wonderful memories in perspective!

What to do and see in Mongolia?

As you will have understood, Mongolia's best asset for attracting travelers are its vast wilderness and superb landscapes that seem straight out of another world.

Among the sites that you must try to visit absolutely, let's pin for example Khösvgöl and Uvs lakes, the two largest bodies of water in the country. Or the rather unusual vestiges of the former capital of the Mongol Empire, Karakoram. The latter was established there by the son of Genghis Khan, Ögödeï, where his father had set up his base camp around 1220.

The official language of Mongolia is Khalkha Mongolian. But there is a whole set of Mongolian languages ​​spoken in the country (depending on the region visited).
Russian is also regularly spoken and we can find interlocutors to exchange views in English and Mandarin Chinese.

Winter is freezing with temperatures that can drop below -40 °. Spring is marked by sandstorms, while autumn often sees the arrival of the first snows. It is therefore in summer that it is best to go to Mongolia, even if the temperatures can be very hot during the day, especially in the Gobi Desert.

The offer of care being very limited, it is advisable to benefit from a sickness-repatriation insurance contract for the whole of your stay. For the rest, it is especially advisable to avoid illegal taxi services (especially for single women), but Mongolia remains a “safe” country overall. As always, we invite you to consult the France Diplomatie website before leaving on your trip.

By plane : Ulan Bator Chinggis Khaan ULN International Airport is the country's main airport. From France, it is possible to land in Mongolia after a stopover in Pekin, but there are also direct flights.

By train : for the more adventurous, it is possible to go to Mongolia after a journey by train, in the Trans-Siberian.

What to do in Rotterdam? 10 must-see visits not to be missed!

Mediterranean, inexpensive islands at your fingertips

Add a comment from Mongolia: a real wild land