As you already know, Melbourne was built on the fallout from the gold mines exploited in Victoria in the 1890s. Its city center is therefore steeped in Victorian architecture, London-style shopping malls and the best small cafes and restaurants.

The alley of "Center place" 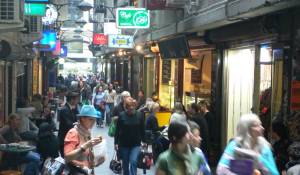 Center Place is an example of the narrow lanes of Melbourne's city centre.

The restaurants settle on the street, within the walls of the buildings, with only a few 9m² to sell you the best sandwiches, soups, and kebabs.

We lunch along the walls on the edge of the street to watch the diverse population of Melbourne pass by and listen to the improvised musicians.

In this district, you will also find many freelance stores of young designers in jewellery, clothing and accessories, made in Australia! 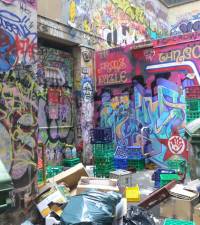 To the right of Center Place, a dead end cluttered with boxes and bins serves as a showcase of protest for the people of Melbourne.

Fully tagged, we read slogans against government policies or in defense of Aboriginal rights.

The chic arcades of Collins Street 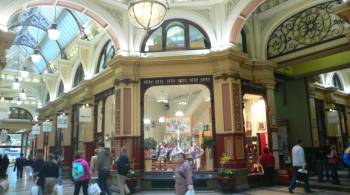 A block away, Center Place driveway ends in a gleaming Victorian archway of chic marble, ironwork and storefront.

In the 19th century, Melbourne was indeed one of the most important Victorian cities in the world, along with London, Chicago and New York.

Unfortunately today many buildings have been destroyed, but around Collins street you can admire those that have been restored, such as the famous Block arcade. 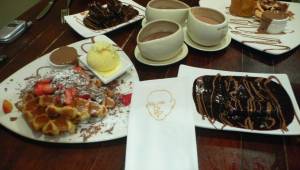 This entire CBD district is nicknamed “Paris End”. It's good because there are many small restaurants, cafes and chocolate delights!

Ideal and essential to gently forget the cold and humidity of winter in Melbourne!

Go on a safari in Brazil ❯