Marine mammals in Australia: where to see them.

Australia, surrounded by ocean and with preserved and wild marine sites, is an ideal place to observe, often very closely, marine mammals.

You will find here a summary of the essential sites allowing the observation of whales, dolphins, seals and sea lions.

All the Australian coasts are regularly visited by marine mammals, but certain places or certain seasons will almost certainly guarantee you encounters. 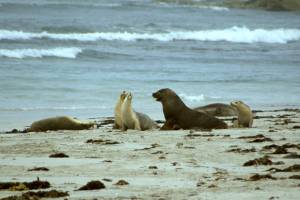 The site of Head of Bight, on the Great Australian Bay, at the beginning of the Nullarbor plain, is a place to observe, from May to October, the right whales, which come to spend the austral winter in the warm waters.

From the top of the cliffs, the view is exceptional.

Near Adelaide, Encounter Coast also offers right whale viewing in a place that is more frequented by visitors, but more accessible.

Kangaroo Island is famous not only for its kangaroos and koalas, but also for its sea lions and sea lions.

You can easily meet sea lions (for example at Seal Beach) but also furry sea lions, which are more shy. 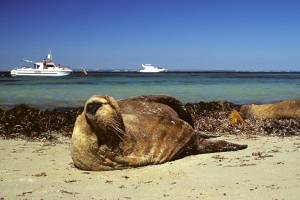 The entire southwest coast allows you to observe right whales, humpback whales or even sperm whales during the breeding season (May to September).

In the waters around Perth, the cessation of commercial fishing has led to an increase in the whale population.

Near Perth, sea lions can be seen.

Some companies in Perth and Fremantle offer boat trips to the islands: the opportunity to see sea lions evolve underwater. 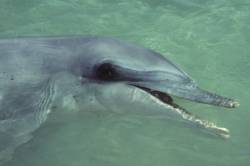 The Monkey Mia site in Shark Bay Park is world famous for its dolphins, which have been coming to the beach for years.

As this beach is very busy, we advise you to go there early in the morning or in the evening.

Between the official feedings, from 7 a.m. to 13 p.m., it is not uncommon for the dolphins to frolic in the water and thus avoid the crowds.

Shark Bay is also a place for observing dugongs, "sea cows" that feed on aquatic plants.

We can mention Cape Byron, Coffs Harbor and Jervis Bay in New South Wales, to witness the migration of humpback whales from June to December.

In Tasmania, right whale watching is possible from the east coast of the island, as well as good opportunities to see a wide variety of sea lions and sea lions, sometimes even elephant seals and leopard seals came from Antarctica.

Like Western Australia, all of Queensland's coasts will allow you to see marine mammals.


Hervey Bay, near Fraser Island is famous for humpback whale watching from July to October.

The Great Barrier Reef also sees many migrations, that of humpback whales but also the very playful minke whale (May to August). 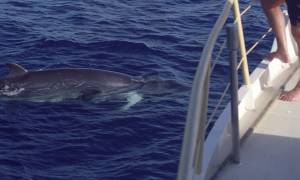 Dolphins and porpoises are also numerous and the closer you get to the North, the more likely you are to see dugongs, near the coasts of the mainland and the islands.

Marine mammals are protected species and their tranquility should be respected.

The organizers of observation activities are required to respect strict rules, in particular not to get too close, but sometimes it is the animals themselves who break these rules out of curiosity! In this case, caution and respect are required.

More information on the places of observation

add a comment of Marine mammals in Australia: where to see them.