Mardi Gras and famous carnivals around the world 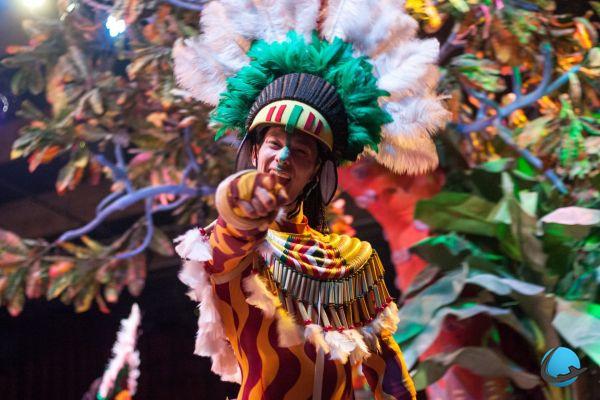 Young and old alike love the festive spirit of Mardi Gras and its carnivals. They allow the inhabitants to take possession of their city and the visitors to mingle with the local population during a meeting which meets with increasing success. In this article, we suggest you do the tour of some famous carnivals! Carnivals are traditionally held around Mardi Gras, 40 days before Easter. The term carnival comes from the Latin "carne levare" which means (in) raising the meat. If fasting is no longer practiced today, we have kept the best: the spirit of the party and the disguises!


so here's our selection of the 7 carnivals to see and experience during a trip!

The Dunkirk carnival: the most convivial

Among the famous carnivals, that of Dunkirk, highly festive, dates back to the 17th century. An old tradition of fishermen wanted them to feast before they left for Iceland. On this day, sailors disguised themselves, which gave birth to the visschersbende. The "band", emblem of the carnival, parades to the sound of the drum major leading the dance. In "ch'ti land", conviviality and warmth of soul are essential. The Dunkirk carnival is spread over two and a half months, from January 25 to March 14, 2020 ! Do not hesitate to rent a costume on site and participate in the various balls. Between the herring throwing, the children's ball and the 3 merry ones ... you will quickly be embarked on the supercharged atmosphere of Dunkirk!

The Nice carnival: the most flowery

The most prestigious and flowery carnival takes place in France, in Nice. The first famous flower battles take place under the Empire, in honor of King Charles-Félix. The opportunity for the bourgeois classes to strut in their finest finery. Beauty and grace are always present, with the parade of flower floats ... and the impressive big heads. This year, the theme is: "King of Fashion" and the carnival will take place. the 15 29 in February 2020. The history of fashion will be presented in a burlesque or poetic way. Don't miss these unique parades where thousands of local flowers are launched every year! This is why the Corsi are part of famous carnivals around the world. 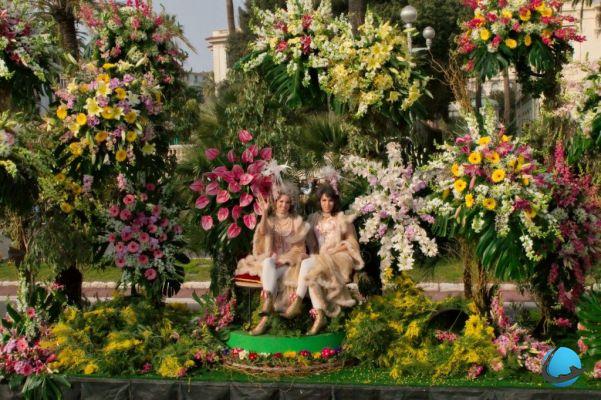 Under the pomp, the Rio Carnival takes on the mask of a tradition inherited from Portuguese settlers in the 17th century. For three days, the slaves disguised themselves with the wigs of their masters, they were free, equal. Today, the whole population takes to the streets to compete in rhythm to samba tunes, each in more sumptuous costumes than the next. Without doubt the most emblematic of all carnivals! This year, the Rio carnival will take place from February 21 to 26. Each samba school has chosen its theme and will present its floats and dancers in this extraordinary competition. To attend, you will need to reserve your seats in the "Sambodromo" where spectators and judges are seated on bleachers or in private boxes. A unique and lively spectacle to see once in a lifetime! 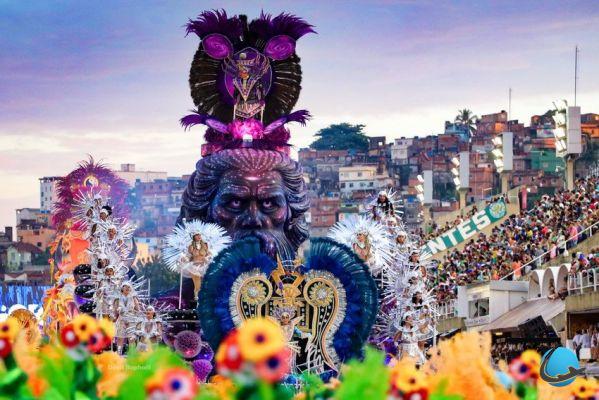 The Venice carnival: the most elegant

The Venice Carnival began during the Renaissance. Aristocrats and commoners disguise themselves to frolic freely in anonymity. White masks, long cape, tricorn or Harlequin costume, the traditional costumes of the Carnival of Venice are inspired by the Commedia dell'arte and have preserved the elegance and refinement of the time. It is undoubtedly the most popular, in the middle of bridges and canals. The parade of Venetians in boats is also a real feast for the eyes. The competition for the most beautiful costume in Saint Mark's Square is a moment not to be missed. A masked carnival in a dream setting, what more could you ask for? In 2020, the Venice Carnival will take place from February 15 to 25. Why not plan a little weekend during this festive period? 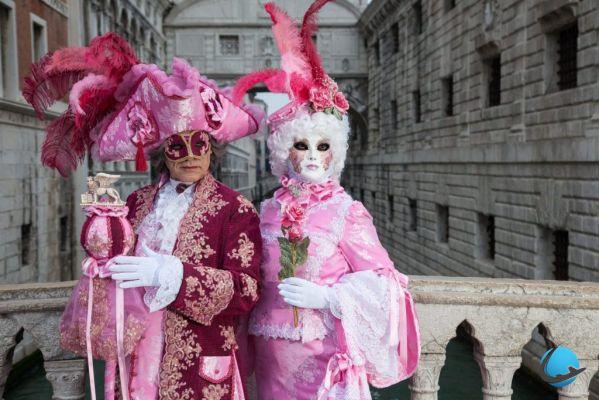 The carnival of Tenerife: the most frenzied

On the Canary Islands, the carnival of Santa Cruz de Tenerife instills a very South American atmosphere in the city for two weeks. Ostentatious luxury, warm colors and frenzied rhythms set the tone for a party of international renown. The Wednesday of the first week of the festivities, the crowd elects its holiday queen. Young girls dressed in their most eccentric costumes, some of whom can weigh over 100 kilos, parade for the beauty pageant! On Friday, the parade through the streets, named here the cavalcade, sets in motion and the multiple participants and groups of unleashed musicians sing their love of the party through songs full of saving irony and freedom. 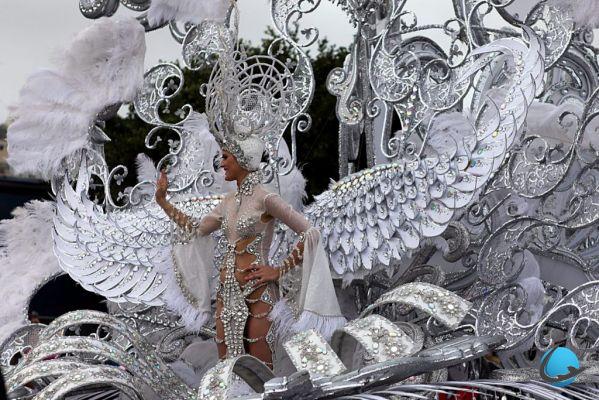 Carnival Tuesday sees the unmissable parade of floats through the city, accompanied by thousands of amazed spectators. The next day, we are organizing the funeral of the sardine which already announces the end of the festivities. The spirit of the carnival is then transported by coach through the streets of the city, then condemned to the stake under the tears and lamentations of all. However, rest assured, the party continues until the weekend and it is only during the celebration of the Pinata Chica that the balls and shows really come to an end. In 2020, book your dates between February 27 and March 10 and think about accommodation well in advance. Like all famous carnivals, the one in Santa Cruz attracts a crazy crowd!

Still in Spain, also think of going to live the carnival of Cadiz!

The Caribbean carnival: the most tropical

In the West Indies, carnival is an institution, which marks as much the attachment to traditions as the memory of dark days. Originally imported by settlers in the XNUMXth century, it was first forbidden to slaves who began to practice it in secret by adapting it to their own customs, introducing masks, characters and songs, witnesses of their culture of origin. In Guadeloupe, as in Martinique, preparations for the carnival begin just after the epiphany, i.e. the first Sunday of January (the 5th for the year 2020). Parades take place in the streets every weekend and we see the towns swarming with little hands busy organizing them during the week. On the program, colorful masks, hyperactive orchestras and all-out queen elections! 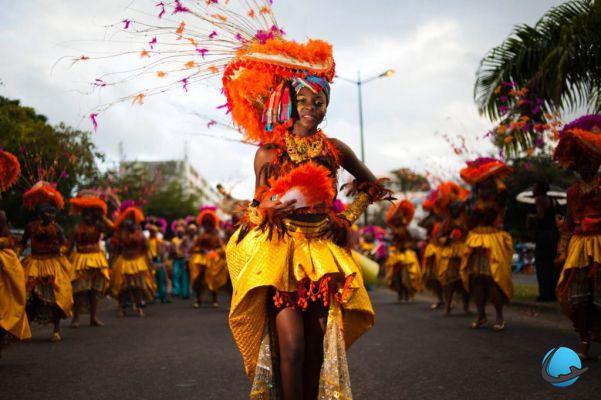 Carnival in the West Indies

The rhythm of the party is obvious in the tropics. This is surely one of the reasons why the carnival lasts here two whole months! Before end on Ash Wednesday, i.e. March 6 in 2020, the party comes to a head during the shiny days between February 23 and 26 this year. During this period, each day has its theme. Shrove Sunday is dedicated to the imagination and freedom of tone, a creative and colorful costume compulsory! It is also the day when king vaval is on display for the first time in the public eye. Shrove Monday is reserved for gender reversal. Men into women and women into men! Mardi Gras starts early and strong. Come and merge into the parade, here called "emptied" and let yourself be carried by the flood of red devils who will arrive later in the day. Finally on Ash Wednesday, black and white are required to do a last honor to King Vaval who will be burned in public at the end of the day, marking the start of a new year of waiting until the next carnival.

The Binche carnival in Belgium: the most festive

Among the famous carnivals, those of the Plat Pays are officially recognized as the friendliest and most festive on the planet. The Binche carnival was also celebrated by UNESCO which consecrated it in 2003 as a masterpiece of the oral and intangible heritage of humanity.. This carnival, the oldest in Belgium, takes place in two distinct parts. The carnival as such begins 49 days before Easter while the "soumonces" begin 6 weeks before the 3 Shrove Days, from Sunday 23 to Tuesday 25 February in 2020. Giving pride of place to tradition, the Binche carnival is highly codified. There are 26 traditional tunes played by a fanfare which includes brass, drums and a bass drum. 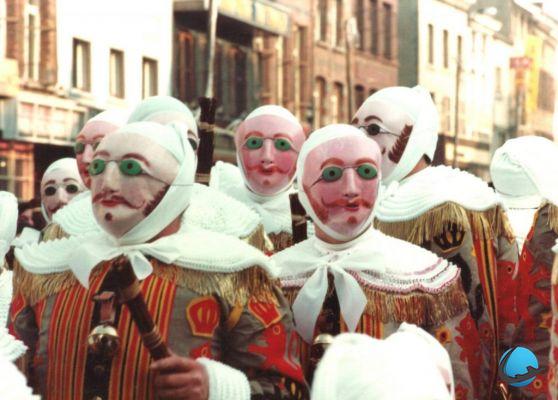 The emblematic characters of the Binche carnival are called the Gilles. They only go out on Mardi Gras and are forced to respect all kinds of rules ranging from the ban on sitting in public to the ban on being drunk, including the compulsory provenance of Binche. Among the other characters who invite themselves to the carnival every year, we find the Harlequin, the Peasant, the Pierrot or the Sailor. Each of them represents a fantasy society which, together, form the human material of this centuries-old carnival, the first written traces of which date back to 1394! Thus, traditions continue and balls follow the glasses of friendship during the various carnival events. We will mention in particular the Trouille des Nouilles which, six days before the carnival, gives the Binchois the opportunity to submit to each other in the guessing game by challenging their friends to recognize them under their masks. An extraordinary festival, the Binche region thus hosts one of the most popular events among famous carnivals around the world! 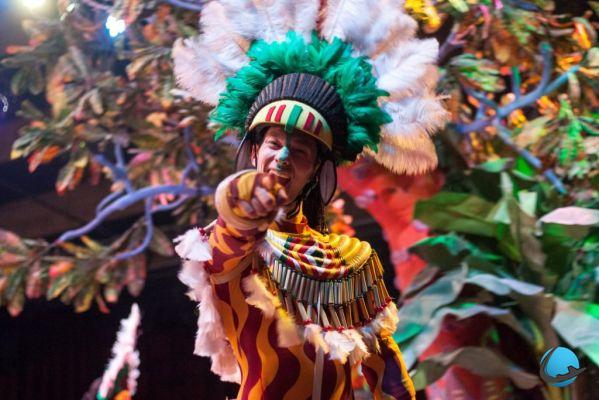 Here is a nice selection of famous carnivals in France and around the world! For most of them, a good year of preparation is necessary. It is a real work of artist, full of passionate volunteers.. And this year, why not put on your best costume to join the carnival riders? In any case, whether in the parade or among the public, carnivals offer a joyful and festive moment to share with friends or family. And you, which carnival would you like to discover this year?

Loss or theft of travel documents, what to do?

10 tips for traveling in peace

How to travel with a disability: practical advice