Avoid the queues, and take full advantage of the London Eye! Thanks to the privileged access that your ticket gives you, you avoid the majority of the queue. On vacation, don't waste your time waiting! The London Eye offers spectacular views of the English capital, overlooking the Thames. Famous landmarks include Big Ben and Houses of Parliament, St. Paul's Cathedral, Buckingham Palace, and Westminster Abbey. 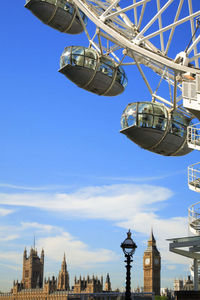 The London Eye soars 135 meters in the sky and sees 40 kilometers of elongation in every direction. Since its opening at the turn of the century, the London Eye has been used as a backdrop in many films and is loved by Brits and visitors alike. Over 3,5 million people per year have climbed the London Eye (an average of 10.000 per day).

Skip the line: London Eye tickets are the fastest way to heaven! You arrive only 15 minutes before your flight and you avoid the majority of the queue with priority access to the expressways. Pre-paid tickets get you in hassle-free, and you can board on any day you choose. Price includes standard ticket plus expedited fee.

Each London Eye capsule can hold up to 25 passengers comfortably. All capsules are fully air-conditioned and rotated on a special device designed to keep everyone standing while the wheel makes a slow but gradual revolution.

Starting point:
London Eye is located on the south bank of the River Thames, opposite the Houses of Parliament.

Departure time:
By purchasing your ticket in advance, you can skip the long lines (which can take up to an hour in high season!) using the 'priority access to the check-in counter'. It's fast and simple.
Opening time: