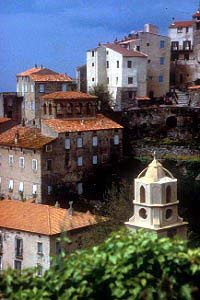 A few kilometers from Ile Rousse and Calvi, here is another Corsica, more authentic, more rural and oriented towards the conservation of its land.

Here, in the heart of the Pays d'Ostriconi, tourism is not considered an end in itself but a magnificent means of reconversion. A way to stop the desertification of the interior of the island while ensuring the promotion of its charms and wealth and its values. A way of offering a complement to seaside holidays while promoting the extraordinary local natural and cultural heritage.

The village of Lama is a pioneer in this micro-region.

Old village of warriors nestled at the foot of Monte Astu, today a "classified medieval village", it is one of those hamlets which almost died out due to lack of population and, even today, less than 100 villagers live there in winter.

Favoring ecotourism, Lama is the ideal starting point for exploring the region: 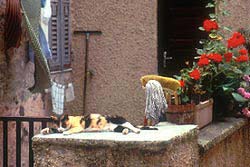 that of the beautiful Ostriconi beach, that of the nearby Agriates Desert, that of the other villages of the Ostriconi (Novella, Pietralba, Urtaca and Palasca), that of Monte Astu where many mule trails are highly appreciated by hikers ,

But above all, Lama wants to be a village with an atmosphere. Its old traditional village houses always have an open window or door for the traveller.

Here, the tradition of hospitality is still respected and it is not the managers of the delicious little local tables d'hôtes (who favor traditional recipes and the best local products) who will give the lie.

1: Lama, an authentic old village of warriors which favors highlighting its terroir and welcoming visitors

2: In Lama, life flows, quiet and carefree, under the hot Corsican sun

3: An old village house, some flowers for color, an old millstone abandoned against a wall: Lama is also an atmospheric village

What to do in the Landes? 10 visits not to be missed!