KAKADU, the jewel of the Top End 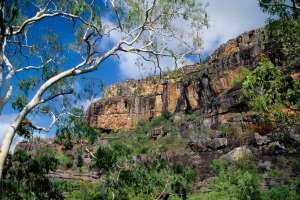 The Top End, as the North of the Northern Territory is called, conceals a magical place classified by UNESCO as a World Heritage Site: Kakadu National Park, larger than the entire Ile-de-France.

250km from Darwin, this wild space is of incomparable richness. This is where the first part of the famous movie “Crocodile Dundee” was filmed.

In Kakadu, one goes from rocky escarpments to floodplains, from savannah to tropical rainforest.

The diversity of habitats and landscapes can be appreciated by taking your time. Kakadu constantly changes his face.

The dry season, between May and October, allows you to explore inaccessible areas during the wet season, from November to April.

In Wet Season, as it is called here, the plains become lakes, the rivers raging torrents.

The best times to visit the park are during the transition periods between the seasons, in May and September or October.

Nature has adapted to the difficult climate and the park allows you to discover extraordinary animal and plant species.

The emblematic animal of the region is undoubtedly the crocodile, present almost everywhere and which means that you bathe in the water holes or the rivers at your own risk and peril.

It is a good idea to respect the no-bathing signs… 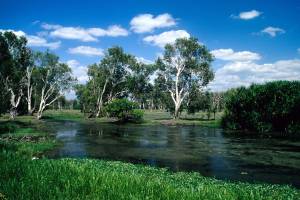 You will also long remember the haunting cries of cockatoos or magpies and the nocturnal yelps of barking owls.

You will also come across wallabies, water buffalo introduced by Europeans, and dingoes, Australian wild dogs.

In the dry season, birds gather around the permanent waterholes called billabongs here and which become oases teeming with life, while the surrounding vegetation is parched (don't be surprised to see impressive bonfires bush, often triggered and controlled by park rangers).


Kakadu is also renowned for some of the most impressive thunderstorms in the world at the start of the wet season in October.

Kakadu Park is jointly managed by local Aboriginal communities and the government.

For more than 50 years, the Aborigines have lived on these lands and have painted their stories on the walls of the rocks such as Ubirr or Nourlangie Rock, silent witnesses of a past that is looking for a future.

The excellent cultural centers of Warradjan, near Cooinda and that of Bowali, near Jabiru, will give you the keys to better understand this complex and fascinating culture which has given the park its strange-sounding place names.

On the practical side, the facilities allow individual tours by rental car.

Prefer an all-terrain vehicle and find out about traffic conditions.

Many group tours are also offered, but they usually last no longer than five days.

Visiting the park deserves more time, but you will already have a good overview. 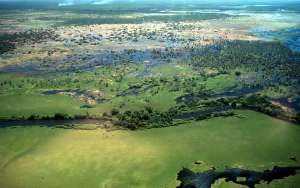 An early morning in the swamps of Yellow Waters, looking for birds and crocodiles, a sunset near Nourlangie Rock or a swim at the base of the waterfall in Jim Jim Falls are times you are not ready for. to forget.

But it is certainly from the sky that we take the measure of the size and diversity of the park.

A light tourist plane flight from Cooinda will take you over plains, rocks and the rocky escarpment that marks the border with Arnhem Land.

To visit the jewel of the Top End is to realize the immensity and diversity of Northern Australia.

add a comment from KAKADU, the jewel of the Top End