You'll fall in love with Sydney on this 2-hour guided walking tour. Highlights of this tour include the World Heritage listed Sydney Opera House, Sydney Harbor Bridge, The Rocks Quarter, Customs House and the Royal Botanic Garden. Learn Sydney's secrets and unravel their stories as you are guided through the heart of the city district. 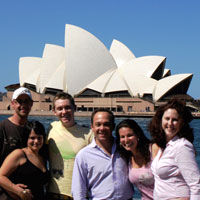 See Sydney off the tourist trail. You'll see where the plague was rampant in The Rocks district, you'll experience modern dramas at the Sydney Opera House, hear the WWII battle in Sydney Harbour, you'll visit the site where the film Mission Impossible II was filmed, stroll through the Royal Botanic Gardens Sydney, unravel Sydney's quirky stories…. And much more.

There's simply no better way to experience Sydney and its famous attractions than on a sightseeing tour with a local Australian guide.

add a comment of Guided walking tour of Sydney