Your first stop will be a village located 10 minutes outside of Corralejo called Lajares. There you will find a cross stitch and lace shop – a tradition across the Canary Islands. Each island has its own style influenced by the history and flora of that island. 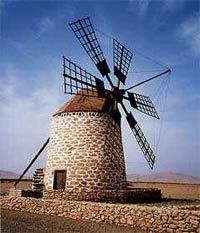 Continue to a village 30 minutes away, called Tefia, at the "La Alcogida" eco-museum. This village has been recreated from the ruins of the original village. The ruins have been re-built with the same materials and methods originally used, and the houses are furnished and decorated in exactly the same style.

Your lunch break will be a 30 minute drive from the museum to a village called Antigua. Lunch will consist of soup, chicken, fries and salads, with fresh fruit for dessert. Wine, water and bread will accompany lunch. The alternative for vegetarians is available with a salad followed by Spanish omelet.

Your next stop will be the initial capital of Fuerteventura – Betancuria. It is a visit to the church (the first built in the Canary Islands in 1404) and the goat farm, where you can taste the famous local cheese and many other local products. You will also have the opportunity to buy souvenirs.

Cross the mountains for the next stop: Pajara – which has been named the sixth most beautiful village in all of Spain. The church is the focal point due to the strong Aztec influence in its design.

You will finally come to a village called Tiscamanita – site of a battle between the locals and the British. In this village you stop at an Aloe Vera plantation where you will be invited to taste the product in its raw form and learn how soothing gels and lotions are made.

Starting point :
Hotels selected and located in the center of Caleta de Fuste, Corralejo and Jandia.