Girona, the Catalan with unexplored riches

Girona, the "city of a thousand seats"

Located between the French border and Barcelona, ​​the city of Girona is discreet, having long been the scene of numerous confrontations and conflicts. The most famous, that of 1809, lasted nearly seven months, ending in defeat, famine and epidemic.

The historic center of Girona retains many testimonies of this long warlike history, from its foundation by the Romans in the XNUMXst century BC. JC, until our days.

For the tourist, the result is a mysterious atmosphere where several centuries and cultures intertwine according to visits, walks in the old town, between memory and architecture, past and modernity. 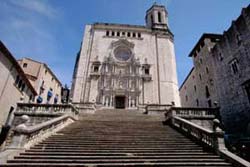 Go in search of the many vestiges of the past, stroll through the labyrinth of alleys, from the cathedral and its monumental staircase to the low and potbellied arcades of the rambla de la Llibertat.

Girona Cathedral, erected between the XNUMXth and XNUMXth centuries, is the most important Gothic church in the region of Catalonia.

Its construction is an almost insurmountable challenge for the builders of the time, one of the widest naves ever built, with a height of 23 meters! 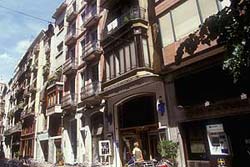 Girona has many other monuments of interest, such as the Benedictine monastery of Sant Pere de Galligants, the convent of Sant Doménech and the church of Sant Nicolau.

To discover buildings of Arab and Jewish origin, you can stroll through El Call, the old Jewish quarter of Girona.

A veritable maze of small streets, there are Calle Força, Plaça del Oli and Plaça del Vi, which have managed to maintain all their picturesque character.

Today it is one of the best preserved Jewish quarters in Spain and Europe. 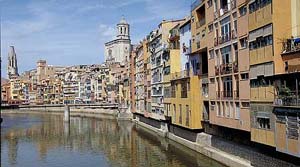 Unusual: you can climb the steps of the building one by one to reach the bell tower of Sant Feliu before crossing the river and heading towards the modern part of Girona.

Known as the "stone bridge", this bridge connects the old town with the modern districts.


From the other bank, a magnificent view is offered on its houses with stacked facades, painted in ocher, indigo blue and copper, in search of the sun.

If you have time, know that Girona is also proud to host the work of one of Spain's greatest architects: Rafael Masó.

add a comment of Girona, the Catalan with unexplored riches