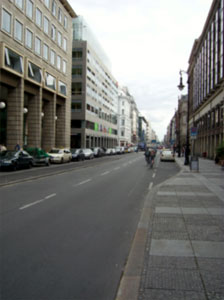 Friedrichstrasse is a major axis of Berlin, linking the city from north to south, and has been for more than three centuries.

If its peak dates from the Belle Epoque, when the street housed all kinds of cafes, stalls and cabarets (see the film "The Blue Angle", which resituates these years in Berlin), it was massively destroyed during the Second World War .

It was gradually rehabilitated, remaining a mecca for nightlife during the existence of the Wall.

When we take it, at the Unter Den Linden crossroads, we head towards Kreuzberg, and more precisely Checkpoint Charlie, the famous roadblock which marked the separation between the American zone and the Russian zone during the decades of occupation.

The street is now lined with luxury boutiques (Berlin businessmen, when they are not going near Ku'Damm, rush here to the suit and shirt shops), department stores, hotels and office sets. 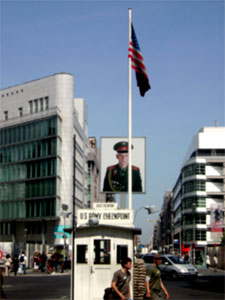 Further south, we come across a key point in Berlin's history: Checkpoint Charlie. Here you can know everything about the Wall.

The barrier with the gatehouse and the piled up brown bags that we see today are not very authentic, but who cares, it looks like it, and the tourists are delighted.

Moreover, two (fake?) soldiers, one American, the other Russian, do not hesitate to be photographed with visitors in the middle of the street.

There are also remains of the Wall, but they are of little interest compared to Friedrischain's East Side Gallery... 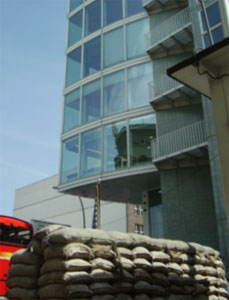 In fact, the most interesting at Checkpoint Charlie is the Mauermuseum (Museum of the Wall).

A slightly expensive entry (9,50 euros) but it's worth it, as it conveys well the conditions of separation and the atmosphere of the city between 1961 and 1989.

It begins with a room explaining the Blockade of Berlin (1948-1949) and its consequences on the reconstruction of the city after the war.


On the first floor, we discover incredible photos of the means imagined to cross the Wall (in a microlight, with a pole, through the sewers…), videos retracing the construction and the Fall (with obviously the famous improvised concert by Rostropovitch) and works of art related to the “Wall of Shame”.

A very interesting dive into this period of history that makes all Europeans coming to Berlin fantasize...

> To get to Checkpoint Charlie and the Wall Museum, get off at Kochstrasse station, on the U6 line.