The British capital has been the setting for many films, from the recent "Match Point" (Woody Allen) and "Da Vinci Code" to the unmissable "Four Weddings and a Funeral" or "Bridget Jones's Diary". 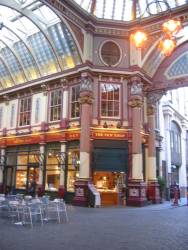 Children will love discovering the locations of the movie "Harry Potter and the Sorcerer's Stone".

We recognize the famous "crossroad" at the leadenhall market of the City, a very beautiful covered market, of Victorian architecture.

It is here that the young wizards buy their school supplies (cauldrons, ballets, owls…) and that Harry gets his first magic wand.

Unfortunately, you will not be able to obtain such items.

Explain to your kids that "muggles" can't see the magical world, and voila!

Then take them to London Zoo, where Harry discovers he can talk to snakes.

If you take the train at King's Cross station, platform 4 served as platform 9 ¾ for the departure of the Hogwarts Express. Do not try to pass through it, you risk serious injury! "Mind the wall". 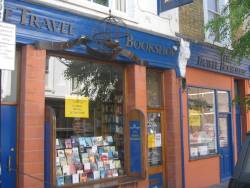 Fans of 'Love at First sight in Notting Hill' will recognize the setting from this film when strolling through this bustling area of ​​West London.

Stroll along Portobello road, the main street of this upscale neighborhood with a village atmosphere.

A market very popular with Londoners is held there daily.

The travel bookshop where Hugh Grant works in the film is modeled after the Travel Bookshop located at 13 Blenheim Crescent. 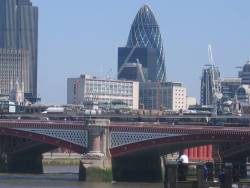 "Bridget Jones's Diary" was filmed in the Borough market, London's favorite fruit and vegetable market, south of the Thames.

We also see the building of the Royal Exchange which is located in the city.


From here, look up to see the skyscraper of the Swiss Re Tower, called "Gherkin" by Londoners because of its pickle shape.


It is in this emblematic building of the London revival at the turn of the millennium that Jude Law works in the film "Match Point". 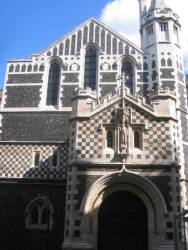 The continuation of our cinematic tour takes us to the most beautiful places of worship in London.

Discover the simplicity of the circle at Temple Church and the famous Westminster Abbey as seen in the movie 'The Da Vinci Code'.

Then visit the Church of Saint Bartholomew the Great, one of the most beautiful in London.

She hides behind an archway just off the Smithfield Meat Market.

This Norman Church built in 1123 will surely tell you something: these dark stones, these vaults, this dark light... you have seen them in several films including "4 weddings and a funeral" and "Shakespeare in love"!