Festival of Lights: when Lyon shines with 1000 lights 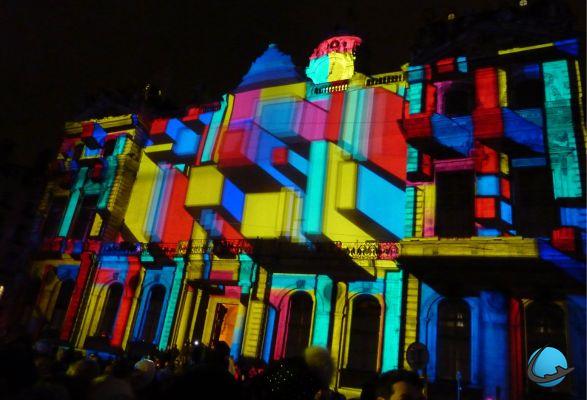 December 8 is the Festival of Lights in Lyon

La Lyon Festival of Lights is one of the region's most anticipated events. On December 8, all the inhabitants of the city traditionally place candles in their windows. But, to the chagrin of some grumpy people, many light installations are also installed all over Lyon, which attracts millions of visitors every year ...

The origins of the Festival of Lights

En September 1852, the Saône is in flood. This obliges the religious authorities of Lyon to postpone the unveiling of a statue of the Virgin Mary at the top of the Fourvière hill. An inauguration scheduled for September 8 and postponed to December 8. Unfortunately, three months later, the weather is still bad. Result: we think once again to cancel the event. At the last moment, a small miracle occurs and the sky clears.

To celebrate this, the Lyonnais put candles in their windows and walked the streets of their city, singing hymns to the glory of the mother of Christ until the wee hours. This is how one of the nicest festivities in France was born over 160 years ago!

Illuminations throughout the city

Over the years, the event has greatly evolved. If a luminous inscription “Merci Marie” is still present on the Fourvière hill, the Festival of Lights now extends to all districts of the city.
Each year, more than 4 million visitors walk the streets of the city, during 4 festive and colorful evenings. The facades of the main buildings come alive to the rhythm of artistic creations that are sometimes unusual, sometimes spectacular. The Célestins theater, Saint-Jean cathedral and Place des Terreaux are among the most popular sites. And in the city center, the big wheel on Place Bellecour and the Christmas market on Place Carnot welcome many curious people on this occasion.

However, the Festival of Lights is no longer limited to the Peninsula since it has also taken over the Tête d'Or park, as well as the new Confluence district.

The Festival of Lights in 2016

If the 2015 edition has been reduced to its simplest form due to the terrorist threat, the 2016 edition promises to be truly thrilling - even if it will not have its usual dimension. It will of course begin on Thursday, December 8, and will continue until Saturday 10, from 20 p.m. to midnight.

During 3 evenings, you will be able to admire no less than 41 exceptional light installations distributed in the center of the city, mainly on the Peninsula but also - and this is a first - at the ancient theater of Fourvière.
This Festival of Lights 2016 will take place under close surveillance, so that everyone can fully enjoy it. It will therefore be necessary to be patient to pass the security gates and attend this incomparable spectacle.

Finistère in the rain: what to do when it rains? ❯

Pilat Natural Park: what to visit, what to do? Its strengths, my selection

What to do around Toulouse?

Add a comment from Festival of Lights: when Lyon shines with 1000 lights