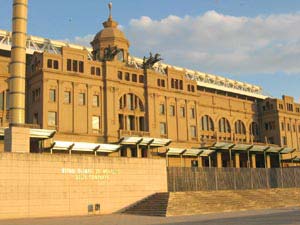 At the top of Montjuic stretches the “Olympic Ring” of Barcelona. The site seems huge and a bit deserted when there is no football match.

The massive architecture of the Stadium then takes on its full extent, and we discover with astonishment the Palau San Jordi.

The Estadi Olimpi Montjuic was transformed by Pere Domenech i Roure on the occasion of the 1992 Olympic Games.

The pediment was decorated by Vicenç Navarra, and I discovered with surprise that most of the statues had been made by Pau Gargallo. 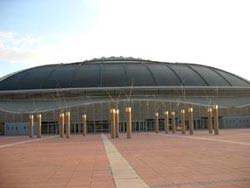 The Estadi is imposing, it can accommodate 55 people, and up to 000 when the additional seats are installed. The best thing to do is certainly to attend a football match!

Below, the immense oval of the Palau San Jordi contrasts with the Stadium. Also created for the occasion, this “gymnasium” is specially dedicated to handball and volleyball.

Today it also hosts many concerts, balls and shows. 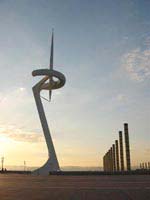 Antenna symbol of the olympic games

On this same esplanade rises the antenna of Téléfonica. Santiago Calatrava. I digress ?

This antenna is not only functional, it was built by Santiago Calatrava to become a symbol of the Barcelona Olympic Games.

You can see it from afar and it may evoke the Olympic flame. Its architecture seems to defy all the laws of balance, we seek the center of gravity, and its inclination is accentuated by its 117 meters in height.

The Palace of Music ❯

add a comment of El anillo Olimpico – the Olympic ring