Delve into Berlin's past, from 1920s Friedrichstrasse to present-day Potsdamer Platz, on this uplifting half-day guided walking tour. As you walk, your guide will discuss the themes of Prussian, Imperial, Nazi, Cold War and 21st century Berlin in great detail and drawing on the latest historical studies, thanks to their formidable storytelling skills. 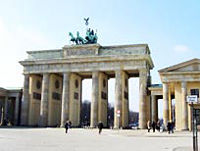 This fascinating walk begins with an account of how Berlin was founded. You will take a stroll along the famous Unter den Linden avenue, passing from the University to the Opera, and discover where the books of Nazi students were burned in May 1933.

The walking tour takes you to the War Memorial (Neue Wache) and the State Library, where Albert Einstein worked. You'll see where Friedrichstrasse once stood during the 1920s and how this area was reinvented as Berlin's luxury shopping street. To learn how public transport worked in a divided city, you'll visit a ghost train station.

After passing through the Brandenburg Gate and seeing the Reichstag (Parliament) with its famous new dome, you will walk past the new Holocaust Memorial and visit Hitler's bunker site. Listen to the guide explaining what went well here at the end of the war, and why there is nothing left to see.
Then you can see how Berlin takes shape on Potsdamer Platz in the 21st century, and learn where the Nazi SS and Gestapo HQ were. You will see the Berlin Wall and follow the "death strip" to Checkpoint Charlie. As you walk, your guide will tell you how the wall was built, as well as the key events leading up to its fall in 1989.

The tour ends in one of Europe's most beautiful squares, Gendarmenmarkt, not far from the Wall Museum at Checkpoint Charlie.

add a comment of Discovery walking tour of Berlin - Half day