Coober Pedy, Welcome to the Outback! 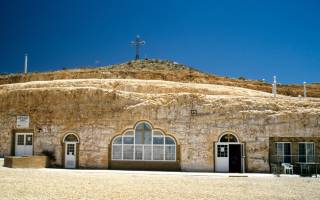 If I tell you that most of the movies supposed to take place on the planet Mars have been shot around Coober Pedy, as well as Mad Max III, you'll get a good idea of ​​what this unusual place looks like.

The name of this town lost in the desert between Alice Springs and Adelaide comes from an Aboriginal expression meaning "white man's hole".

The reason for this city's existence is indeed a rainbow-colored stone: the opal. On nearly 5000 km², thousands of mine shafts perforate the plain around Coober Pedy.

Cosmopolitan city, you will hear Greek, Yugoslav or Chinese spoken there, the miners having flocked from all over the world to make their fortune in opal. 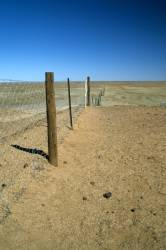 Many inhabitants live in dugouts, underground houses and it is not uncommon for iridescent opal veins to act as wallpaper.

You can also get a glimpse of dugout life by spending the night in one of the local hostels 10 meters deep.

The city's accommodations also offer half-day tours to visit the city and its region.

You will discover an underground church, active opal mines and to the northeast, the famous Dog Fence, a 5300km barrier supposed to protect the sheep farms of the South from dingoes, the Australian wild dogs.

You can also try your hand at noodling, the search for opal fragments in the excavation mounds of the mines. 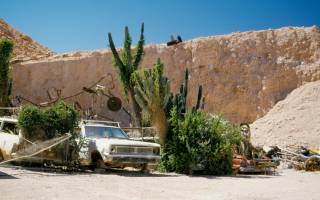 In Coober Pedy, you'll see things you've never seen before… Like a golf course whose “greens” are made of waste oil on reddish sand.

Or the home of Crocodile Harry, an eccentric character who decorated his dugout with women's underwear and turned the car wrecks outside his house into planters.


One of those unusual and crazy Australians who populate the Outback.


If you have a taste for adventure, you can also follow the postman on his rounds on Mondays and Thursdays, the opportunity to discover very remote places in the region.

And if after all that, you want to relax, go to the Coober Pedy drive-in cinema, finally reopened.

The owner had closed it for two years to protest against the miners who took their pick-up full of explosives there!

Welcome to the real Outback, almost a cliche bordering on the absurd. Which nevertheless remains "The world capital of opal"...

Corridas: the end, not yet ❯

add a comment of Coober Pedy, Welcome to the Outback!