Brighton: the beach and the piers

Brighton is Britain's favorite south coast resort town. Located one hour south of London, it is nicknamed "London by the sea".

Here, there is no fine sand and turquoise sea… But the English Channel and its pebbles know that they have nothing to envy to their southern counterparts. They are English at least... 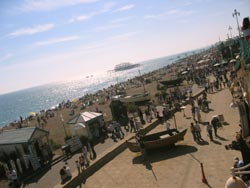 The busiest part of the seaside is between the two piers (jetties).

Brighton's shingle beach is crowded every spring and summer weekend with Londoners spending a weekend by the sea.

Along the beach, there are many bars and nightclubs, art galleries and the fishing museum.

In the evening, the seafront is very lively, between clubbers and groups preparing a barbecue.

In the evening, the pebbles light up with dozens of fires: it's up to you to find which one to join! 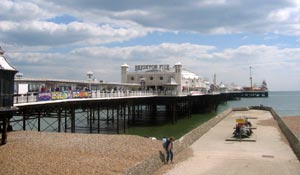 The palace pier is a long pier in the sea housing a funfair and slot machines attracting many tourists and especially families.

Walking there is an interesting sociological experience: it will allow you to observe the exit of a basic English family...

The pier attractions are expensive, the food absolutely disgusting, the music boring, and yet…

It is the most visited place in the city. By walking to the end of the pier, you will be rewarded for this ordeal with a beautiful view of Brighton beach. 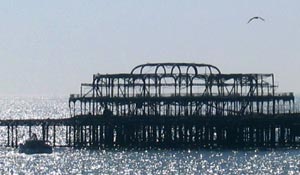 To your right when you face the sea, you can see a rusty iron skeleton jutting out into the sea.

This is what remains of the West Pier following 3 fires and a storm… These ruins give rise to the liveliest debates in the city.


Should it be restored? Take it apart? Not to mention the investigations to find out who was responsible for the fires…

A theory circulates in the city according to which a seagull would have carried a lit cigarette butt there, thus causing the destructive fires!!


In the meantime, the West Pier is crumbling into the sea and shrinking year by year under the onslaught of the waves.

However, it does not lack charm at sunset, with the seagulls doing strange dances around it.

It's almost a message to the Brighton pier opposite about vanity and the transience of existence...

If you continue your walk after the west pier in the direction of Hove, take a good look at the houses.

The famous inhabitants of Brighton have taken up residence in this district: Paul Mac Cartney, Nick Cave, Fat Boy Slim…

add a comment of Brighton: the beach and the piers