The Royal Pavilion is one of Brighton's most visible and famous symbols. It leaves no one indifferent and reflects in its own way the soul of this eccentric city. 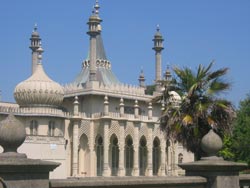 The royal pavilion surprises first of all by its location in the heart of the city.

We look up and suddenly we see this oriental building with its stucco domes and minarets.

We really wonder what he is doing there because his architecture contrasts completely with the environment.

Some residents of the city complained at the time of these multiple "turnips" erected in the city!

The pavilion bears witness to Brighton's royal past which made it a fashionable place from the 18th century.

King George 4 had this palace built from the original small farmhouse in what was then a town famous for its seawater cures.

The architect John Nash, one of the most influential in England, gave it that Indian style that characterizes it today. 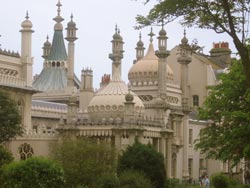 George 4 was known for his loose morals, his love of women and alcohol, and his incessant entertaining. No wonder he chose Brighton!

When you visit the pavilion, you will learn many anecdotes about the life of this king.

Hidden doors in the palace walls are said to have led through subterranean passages to the home of his mistress Miss Fitzherbet, whom he secretly and illegally married (she was Catholic and divorced). 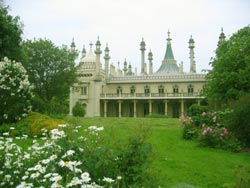 The interior is as surprising as the exterior. I would be tempted to say that the whole thing is rather in bad taste and totally kitsch!


A chandelier, the pavilion's most famous piece, depicts an enormous dragon that weighs over a ton.

We understand why the guests hesitated to sit down to eat! The golden dome of the music room is also impressive.

We then visit the apartments of George 4, and on the first floor those of Queen Victoria.

The latter, who hated Brighton, which she described as vulgar, sold the pavilion which was bought by the city.

Take advantage of your visit to take a tour of the pavilion gardens and the Brighton Museum: admission is free and you will learn all about the history of the city.