This walk will take you through Berlin to two Cold War-era civilian active shelters. The first is under Blochplatz and is part of the Gesundbrunnen metro station. Originally an Air Raid shelter from the time of the Second World War, it was completely renovated in 1983. The festival with the “Berlin Documentary Theater” will take place in a shelter and an idea of ​​what is happening behind the scenes of the production will be given. 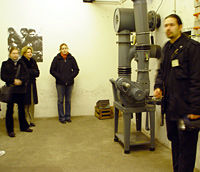 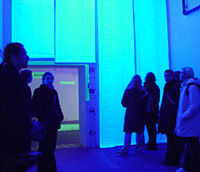 The tour details the history of this construction, especially after the construction of the Berlin Wall in 1961. The "Wall in the Underground" is discussed, including the plans posed by the GDR authorities in Berlin to separate the network from sewer under the border. Listen on so-called "Ghost" stations, underground stations under the streets of East Berlin that have been closed to the public, but used by transit lines on the way from the West through the East and back again West. In addition, your guide will discuss the issue on safety such as anti-nuclear bunkers in a case of the explosion which would cause a serious atomic stroke.

At the Blochplatz civilian shelter, you are guided through a dark corridor directly into a transformer station of the Berlin Transport Authority. Here some information is given of how the electricity supply for the underground network functions. The last part of the tour will take you to another shelter, only one metro stop at Pankstrasse. This modern air raid shelter was opened in 1977 and more than 3.400 people can be protected in the fourth largest establishment of its kind in Berlin. In the event of a potential nuclear disaster, the entire Pankstrasse underground station could be closed and turned into a safe haven. Pass through the large steel gas locks and get a sense of what it means to be isolated from the outside world.

Starting point :
Gesundbrunnen metro station. The meeting point is easy to locate, and your guide will be waiting for you.