In the morning during your walking tour, discover the darker side of Berlin by visiting this 'Nest of Spies'. From the SS and MI5 to the CIA and MI6, you'll enter the ruthless world of Spy vs. Spy during this fascinating walk through Berlin's recent past. 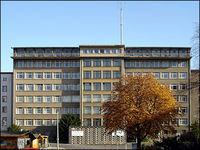 To initiate the operation, your "device" takes you to the Tiergarten, where British MI5 agent Frank Foley is secretly aided by over 10.000 Jews who escaped Nazi Germany.

You'll visit the courtyard of the Wehrmacht HQ, where the coups and assassination attempts against Hitler were disastrous, and learn where the SS orchestrated with their first program of mass murder, the "Project euthanasia". When exploring the exterior of Grand "Stalin Allee", a showcase of post-war GDR communists lets you experience the scene of festering discontent in 1953.

Learn about 'Operation Gold', a top secret CIA/MI6 spy tunnel, and how a British double agent blew the whistle on the whole operation. On Bernauer Strasse, you'll see where Berliners' daring attempt escapes under the wall, trying to stay one step ahead of East Germany's secret police, the Stasi.

The tour ends at the infamous Stasi HQ, office of Markus Wolf, 'the faceless man' and model spy John Le Carré 'Karla'. Take the opportunity to visit the museum at the end of the visit where the specter of Stasi informants and their controllers will haunt your step!

Starting point :
Departure from a taxi stand outside Zoo Station (Bahnof Zoologischer Garten). The meeting point is easy to locate and your guide will be waiting for you.

Athens Walking and Photography Tour: In the Footsteps of Antiquity ❯