Trace the years from 1962 to 1970, when Beatlemania was at its height, as you visit more than 35 Beatles-related sites on this evening tour through central London. You'll also see some sights relating to the band members' individual musical careers while your knowledgeable local guide ensures plenty of photo stops and entertains you with the history of the Beatles through music and film. 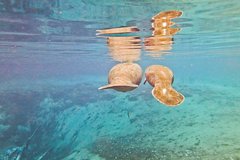 This fun tour of central London is exclusively dedicated to Beatles-related sites – a must for Beatles fans! Enjoy a summer evening in London to relive the Beatlemania years, and discover the places that influenced the career of the Beatles as John, Paul, Ringo and George became one of the biggest bands in the world. story.
On this tour, you'll see many locations from their early shows, as well as the only apartment where the Beatles lived together. Visit locations where their album cover photos were taken, including the famous Abbey Road pedestrian crossing, where you can walk in the footsteps of the Fab Four. Discover the sites where some members of the group lived, such as the apartment of John Lennon and Yoko Ono, the house and office of Paul McCartney in Soho, and the apartment of Ringo Starr. And visit filming locations from A Hard Day's Night, Help! and Magical Mystery Tour.
With over 35 sites associated with this legendary Liverpool band, this is the most comprehensive tour of historic Beatles sites in central London, including the site of their last show – the Rooftop Concert.
This evening tour includes live commentary from your specialist Beatles guide, who will recreate the magical Beatles years with music and film.

add a comment of Beatles-themed evening tour of central London