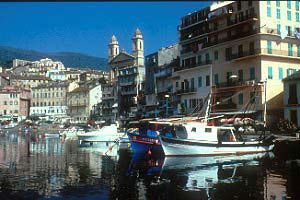 Prefecture of the department of Haute-Corse, Bastia is the true island economic capital and one of the most beautiful towns on the island.

Continuing its development, the city combines as harmoniously as possible its economic expansion at the gates of Cap Corse and the preservation of the traces of its rich past.

At the foot of the Massif du Pigno, Bastia occupies a small bay on the northeast coast of Corsica and marks the border between the plains of Biguglia and the first escarpments of Cap Corse.

The citadel of Bastia

The most picturesque district of this former Genoese capital remains the charming old port.

The colorful houses that border it are already reminiscent of typical architecture from across the Mediterranean and surround this former fishing port where nearly 300 pleasure boats are moored today.

Dominating the whole, the beautiful church of St Jean Baptiste deserves a look: its Baroque Ligurian facade flanked by 2 bell towers, its trompe-l'oeil paintings, the high altar in polychrome marble, the paintings of the Italian school, … are worth looking at.

Before going up through the alleys and stairs of Terra Vecchia towards the citadel and the Place du Donjon.

A splendid view awaits the walker. On the old port then, in the background, on the first reliefs of the Cape.

Passing by, you have to stop in front of the Governor's Palace (superb Ethnographic Museum!) then, on the way down, stop at Place St Nicolas.

Seated on one or the other terrace, sipping a little cream or a delicious local Muscat, we let ourselves be taken in by the charm of this square largely shaded by plane trees and palm trees, where retirees throw themselves into games fierce petanque.


1: Dominated by the church of St Jean Baptiste, the old port of Bastia remains the most picturesque district of the city

2: Shaded alleys and stairs worn by the years and the incessant passage of Bastiais lead to the citadel and the place du Donjon

3: Sunny and shaded at the same time, the Place St Nicolas allows you to make a pleasant stop during the discovery of the city