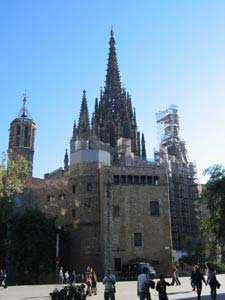 In the heart of the Gothic Quarter, Barcelona Cathedral is a place of contemplation, or at least rest for the weary traveler.

The cathedral was built during the 985th century to replace the first Romanesque cathedral on the very ruins of the primitive cathedral, built in the XNUMXth century and destroyed by Almanzor in XNUMX. It is one of the most representative constructions of the Gothic period. Catalan.

From the outside, the Cathedral appears quite sober. The decoration is reduced, this only amplifies the presence of the gargoyles, present on all the facades. A little squat in appearance, its two octagonal bell towers nevertheless give it a slender air.

The square and the square of the Cathedral are very busy public places where the people of Barcelona meet to chat or have a drink.

Our activity: A day in Barcelona 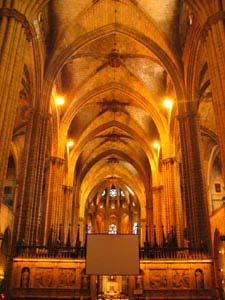 The cathedral has three naves of the same height, making it a truly Catalan building. From this architecture emerges a feeling of architectural unity and homogeneity.

At the level of the lower part of the presbytery is a wide staircase. By borrowing it one arrives at the crypt, where one can see the sepulcher of Saint Eulalia, inaugurated in 1339 at the time of a great ceremony of transfer of the relics. 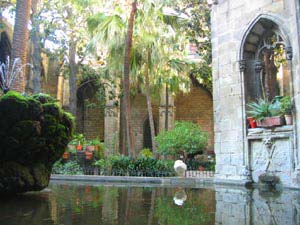 A side door gives access to the garden of the church. It is surrounded by four galleries and is adorned with palm trees and magnolias. A water point and a fountain make it a cool and pleasant place where it is good to rest for a while.

Dedicated to Saint Eulalia, the great protector of the Catalan city, Barcelona Cathedral was built in 1298 during the reign of James II. What is very surprising in the history of this Gothic building is that it went through centuries and centuries of construction before being finally completed in 1913. The decor and the sumptuous structure are therefore not the work of one person but several architects over time. At first glance, we discover a gigantic facade and the octagonal bell towers and we are instantly impressed. Inside, where magnificent would only be an understatement, there are about twenty chapels along a wide nave. Under the choir, one can admire the crypt which contains a sumptuous sarcophagus made of alabaster where the bones of Saint Eulalia rest in peace. In the choir stalls, there are the coats of arms of the famous Knights of the Golden Fleece. These stalls are one of the first constructions of the Cathedral. In the cloister, a magnificent fountain adorns the center, one can admire a magnificent statue representing Saint George fighting with the dragon. The Sacristy Museum occupies one of the east wings, and exhibits many priceless liturgical objects.

The City, temple of commerce ❯