A tour of Dover Castle, the Secret Tunnels of War, Canterbury and a day cruise on the River Thames from London

Discover England's rich history on a day trip from London to Dover Castle, Canterbury Cathedral and Greenwich the maritime town of Greenwich. You can enjoy guided tours through all these famous sites, and end the day with a scenic cruise on the Thames to Westminster. 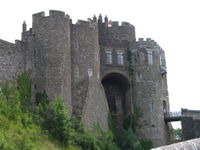 After leaving central London, the tour begins on the English coast in Dover, with views of the legendary White Cliffs of Dover. A visit to the Great Tower of Dover Castle will take you back to the medieval court of King Henry II (in 1200). The latter created this tower, in order to show his power and his wealth.

You will also discover Dover's secret wartime tunnels and experience life as it was lived by the 700 soldiers who were stationed there during WWII. You will see the Command Center where Sir Winston Churchill watched the Battle of Britain. You'll relive the drama as a surgeon struggling to save a pilot's life in the underground hospital, and see the room where the Dunkirk evacuation was planned.

Then you will travel to the ancient city of Canterbury. After lunch (included), you can enjoy a guided walking tour where you can listen to ancient stories regarding the assassination of Thomas Becket at Canterbury Cathedral in 1170, which turned the cathedral into a place of pilgrimage for the Christians all over the world. This pilgrimage is the theme of Geoffrey Chaucer's XNUMXth century literary classic, "The Canterbury Tales".

In the afternoon you will head to Greenwich, best known for its maritime history. You'll have time to explore the city through a guided walking tour before joining a Thames River cruise, which passes historic sites including the Tower of London, before arriving at Westminster Pier where it ends visit.

add a comment from A tour of Dover Castle, the Secret Tunnels of War, Canterbury and a day cruise on the River Thames from London