5 things not to miss on a trip to Myanmar 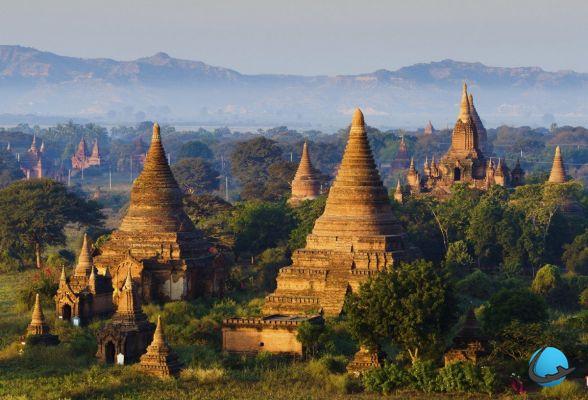 Praised by backpackers, long-haul travel is doing well and benefits destinations that are now open to the world. Burma is a perfect example. If you have already consulted our travel guide to Burma, we can only recommend that you follow the advice of Didier Arino. The director of the Protourism expert cabinet entrusted us with the essential visits to be made for the first time in the country of Aung San Suu Kyi.

Most populous city in the country, Yangon lost its title of official capital in 2005, for the benefit of Naypyitaw. If the colonial testimonies maintain the atmosphere of the Burmese city, it is also a point of entry into modernity with luxury hotels and upscale restaurants. Travelers will find authenticity when visiting the shwedagon pagoda, the most sacred Buddhist shrine in the country. Its 99-meter-high golden stupa is a landmark throughout the city. Amateur photographers will revel in the light of the sunset for splendid images of the monument.

2. Understanding Burmese piety at the Serpent Monastery in Bago

The Burmese are 90% Buddhist. Religion and philosophy are omnipresent during a trip, especially through the imposing golden stupas that adorn the landscapes in the four corners of the country. They are so numerous that no official figure is known. Burma would in any case be the country with the most.

À New, former capital of the Mon kingdom, the Shwemawdaw pagoda was built to accommodate relics of the Buddha. If its golden stupa, the highest in Burma, is an inescapable curiosity, we will understand even better the devotion of the Burmese for the Buddhist precepts in Serpent monastery. Its legendary occupant is none other than a nine-meter-long python in which a revered monk of the Shan Mountains is said to have been reincarnated. The reptile is said to be 110 years old. The faithful place offerings on the animal's scales every day. Sometimes visitors are allowed to touch it.

3. Photograph the Buddha from every angle

Since photographic trips are fashionable, Burma will lend itself perfectly to this kind of initiation. Amateur photographers will have the opportunity to immortalize Buddha from every angle, from the north and the border with China to the Andaman Sea. The mystical figure is presented by sculptures in various positions, all of which have meaning.

Like Wat Pho in Bangkok, a reclining Buddha impresses visitors to the pagode de Kyauk Htat Gyi of Yangon. Others, including one dating from the XNUMXth century, are in Bago and face the cardinal points of the Kyaik Pun's pagoda.

Burma is home to the largest reclining Buddha in the world, near Mawlamyine, in the southeast. Otherwise, there is even a Spectacled Buddha at Shwemyetman Pagoda in Shwedaung.

4. Immerse yourself in Burmese history

For history buffs, head to central Burma. First stage : Bagan, . The former imperial capital shelters an archaeological zone which testifies to the very rich past of the region. The navigator Marco Polo visited it elsewhere and considered it one of the most beautiful spectacles in the world.

Medieval memories are pleasantly scattered by bicycle, to the rhythm of temples and stupas. the temple Ananda is a must stop. Take the road, east, direction Mandalay, , 180 km. To kill two birds with one stone, follow the route along the Irrawaddy, the river embodies the backbone of the Burmese past.

Le Mandalay Royal Palace is the highlight of the visit. It is the residence of the last Burmese rulers. The Japanese found refuge there during World War II. Bombings destroyed it in 1945. A reconstruction took place in 1990. And it is advisable to take advantage of the height of the watchtower to understand the immensity of this ancient city.

5. Meet the Inthas of Inle Lake

Many backpackers will consider Burma primarily as a trip dedicated to meeting the Burmese population. With this in mind, the Inle Lake, to the east, may be an ideal destination. The second largest body of water in the country is indeed the home of the Inthas, a Tibetan-Burmese ethnic group who have adapted to the marine space by building shelters on stilts.

Above all, their fishing alone symbolizes the image of Burma, often depicted on postcards. The technique consists of moving a boat forward with one leg, winding the oar on the other. A conical trap collects fish from the bottom of the water. The lake area alone is worth a trip.

5 tips for a successful photo safari in Tanzania and Kenya ❯

Naypyidaw, the most unusual capital in the world

Why visit Burma? Discovery of an Asian gem